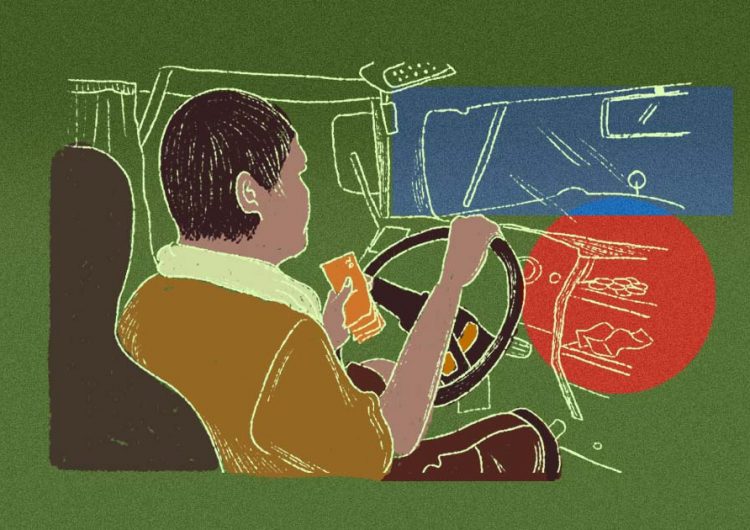 If you type “jeepney drivers” on Google Search, you’ll get related suggestions like “arrested,” “ayuda,” “protest,” “namamalimos” and “jailed” to name a few.

We never wished for more than 100 days of quarantine but here we are. What seems to be mere figures to the privileged are actually never-ending deadlines to daily wage earners.

Most of their livelihood depends on daily movement outdoors and because of the current situation, surviving each day has become as difficult as battling the threat of the virus.

In the pool of daily wage earners, jeepney drivers have been filling up headlines in recent months—and it’s because of deeply pressing narratives. How have the drivers been treated this quarantine? To get a better look, we review some scenes involving these workers.

With an insufficient daily wage (at least P500 to P1,000) and the looming threat of a jeepney phaseout, jeepney drivers haven’t had the most stable life even before the pandemic. And, it looks like it went further downhill since it began.

A report by Bernadette Reyes of GMA News on May 27 introduced us to jeepney driver Mang Angelo who earned only a couple of coins after a whole day of plying routes in Imus, Cavite. Aside from the lack of passengers, he couldn’t cross Bacoor to pick up more commuters because of the enforced modified community quarantine. “Swerte na raw kung makapag-boundary siya sa operator ng P200 at makapag-uwi naman siya ng P100 sa kanyang pamilya,” Reyes said.

“Many small jeepney drivers and operators could become permanently out of work, particularly in Metro Manila,” stated Ibon Foundation. According to the non-profit organization, drivers lost a total net income of P78,000 in three months (P26,000 per month of lockdown). Though the P5,000 to P8,000 subsidy issued by the Department of Social Welfare and Development’s (DSWD) Social Amelioration Program offered temporary relief, the group said it was not enough.

The first tranche of DSWD’s program provided aid to about 18 million households, according to an Inquirer report. However, only 12 million families from the original 18 million were said to have received support in the second payout for May. “An additional five million ‘left-out’ households, however, will also receive financial aid from the government,” Inquirer noted.

Begging in the streets

The financial struggle has led some unemployed jeepney drivers to beg in the streets. A May 14 article by Yahoo! News reported that when Metro Manila’s status was further extended to ECQ, drivers from the Monumento, Baclaran, Blumentritt Transport Cooperative (MBBTC) headed to Rizal Avenue and turned to begging. “Nakakahiya sana manghingi pero tinitiis para may makain,” jeepney driver Noeme Bayona said.

On June 22, another group of drivers, this time in Mandaluyong, was seen asking for money in the streets. Mark Makalalad from DZBB reported that these drivers—who were not able to work for three months—were using a plastic gallon with a note that said, “pangkain lang.”

Though these drivers were given financial assistance of P2,000, Makakalad revealed that this wasn’t enough to sustain their families. These drivers also called for the government’s consideration to have them back on the road.

Unfortunately, another group of drivers who rallied to allow them back to work was arrested. These six jeepney drivers were sent behind bars for violating mass gathering and social distancing protocols, according to authorities but transport group Piston argued that there was strict physical distancing and that these drivers were “arrested for trumped-up charges.” It was also reported that they did not receive cash assistance prior to the protest.

Vice President Leni Robredo said any plan to phase out old jeepneys should not be pushed now as drivers are already struggling with the effects of the COVID-19 pandemic. Read: https://inq.news/jeepneyphaseout

Speaking of the jeepney ban, the long-standing issue about the PUV modernization resurfaced this quarantine. On June 21, Vice President Leni Robredo urged that the jeepney phaseout shouldn’t be fast-tracked during the pandemic, especially when drivers are fighting tooth and nail for a source of income.

“The government has been insensitive and stingy assistance has pushed jeepney drivers and their families into poverty […] Their troubles risk becoming permanent with the government exploiting the COVID-19 pandemic to keep small drivers and operators off the road to fast-track its jeepney phaseout program,” Ibon Foundation said in an Inquirer report on June 19.

What drivers need right now are more opportunities like the Quezon City government’s collaboration with LalaMove to transform jeeps into delivery vehicles. Displaced jeepney drivers in the city—with a target of 200 so far—were given a chance to return to the streets in the third week of June as “Lalajeeps.”

“It’s cheaper than a [multipurpose vehicle] and jeeps can hold a lot of goods so it’s value for money. With the base fee of P200 and an additional P20 per kilometer per delivery, drivers can earn well per day. Some of them were able to pay the boundary to their operators after only two bookings,” Mona Yap from LalaMove said.

But since opportunities for drivers aren’t widespread yet, we can’t expect them to stop looking for other ways to earn. On June 26, Bagong Alyansang Makabayan (Bayan) received reports that the Quezon City Police District (QCPD) “allegedly threatened to arrest jeepney drivers if they continue to beg in the streets” and join a relief program. Inquirer hasn’t received confirmation from the QCPD and NCRPO.

The relief program happened on June 27 and was hosted by Bayan, which aided drivers in the Cubao-Rosario route.

“If the government cannot provide for these drivers, why is the QCPD preventing those who wish to help? Are they going to criminalize relief work, too?” Bayan secretary-general Renato Reyes said.

“For Monday may bubuksan na mga UV, and then followed by the traditional jeepney,” LTFRB Chairman Martin Delgra said.

After a four-month ban, it was revealed that jeepneys are making their comeback in the coming week. However, only 30 jeepney routes would be open, adding to the 38 being plied by minibuses “which are planned to be replaced by jeepneys.” LTFRB chair Martin Delgra said that these routes are interwoven into the route rationalization program.

“Our policies take on the public health concern principally—to ensure the commuters’ health and safety. Public transport is only secondary,” Delgra said. To secure a special permit, jeepneys have to pass emission and road-worthiness tests.

He also echoed assistant secretary Goddes Libiran’s statement who said that they didn’t take advantage of the pandemic to push for jeepney modernization.

We’re beyond 100 days in quarantine. Several quarantine guidelines have been changed since March and while plans have been molded for economic stability and public health, the marginalized and their concerns shouldn’t be swept aside. After all, like in the issues of online classes and gentrification, real progress demands inclusivity.

SHAREWhile collegiate team sports are still out of the picture, it seems that...