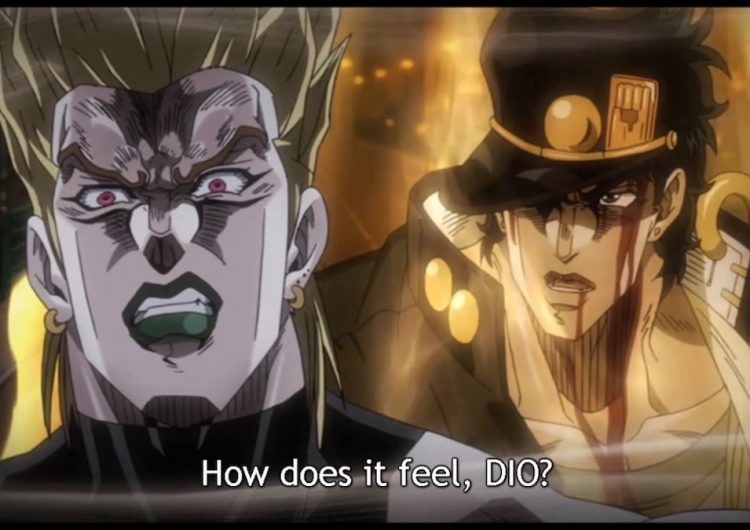 Ever had that weirdly specific fantasy of Jotaro Kujo shouting “giatay” to the skies? This isn’t exactly that but hey, we’ll take it. A fan-made Bisayan dub of anime “JoJo’s Bizarre Adventure” has resurfaced on the web, and it amps up the madness even more (we know, we can’t believe it ourselves).

Created by Marc Christian Lising and voiced by Tatsumi Skye, “JoJo’s Bisayawa Adventures” features the iconic and heavily-memed scene from the original anime, centering on the standoff between Jotaro Kujo and vampire Dio Brando. While hilarious out of context, the original scene in episode 46 of “Stardust Crusaders” is the climactic battle of a rivalry brewing for generations.

For those not onboard the “Bizarre Adventure” train, the anime follows the exploits of the Joestar family, starting from Jonathan, the grand patriarch who becomes rivals with adoptive brother Dio Brando (think Magneto and Professor X, but anime). A cursed mask turns Dio into a vampire and, because of his immortality, their rivalry is passed on to his grandson Joseph and great-grandson Jotaro. Yep, it’s not the kind of heirloom anyone would want.

Today’s realization: Dio and Jotaro are our unexpected Bisayan kings. Check out the two-part videos below:

Read more:
Y2K kids, the OG ‘Yu-Gi-Oh’ series is coming to your screens
Somewhere on the internet, an anime about sex ed exists
Our fave OG anime ‘Ghost Fighter’ is coming to Netflix

SHAREChristmas came early for We Are Imaginary fans, with the band releasing a...

SHAREMarvel fans, have you heard? The fifth issue of The Unstoppable Wasp, penned by...

SHAREWhat’s a good playlist? Probably one that keeps us focused, offers catharsis, and...