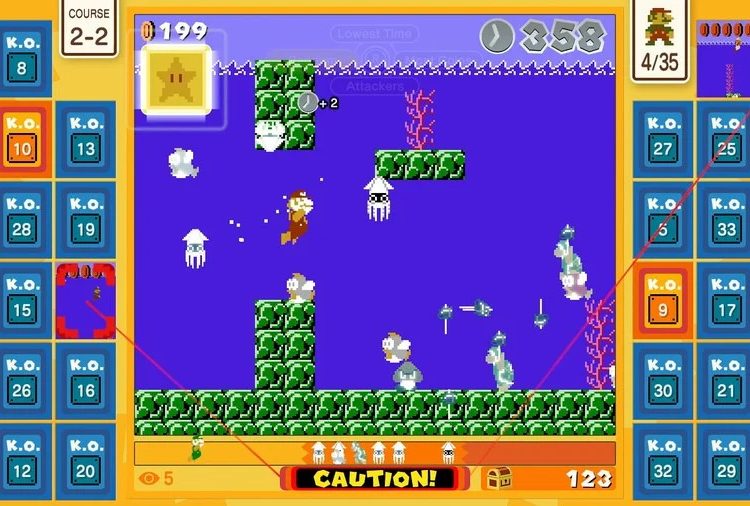 Happy 35th birthday to everyone’s favorite plumbers, Mr. Mario and Mr. Luigi. For a present, the world gives them, uh, a fight to the death.

If you weren’t hit by deadly turtles anytime this month, then you might’ve heard of the latest game to hit the Mario Bros. ’verse: Super Mario Bros. 35. The Switch game is a rendition of Nintendo’s classic Super Mario Bros., which takes it apart and twists it into a battle royale that may ruin potential friendships quicker than Super Smash Bros. ever did. Ain’t that fun?

Released on Oct. 1, Super Mario Bros. 35 is a 35-player battle royale that has a similar look to the OG game as well as with Tetris 99. In the Mario version, all 35 players will play through the level simultaneously, until one player is left standing, triumphant with the proverbial blood of their enemies. Here, any other players defeated in your version of the level will be sent over to other players to fight with.

Aside from its look, Super Mario Bros. 35 takes a page from Tetris 99 in other ways. The progress of your 34 opponents will be clearly visible—you can target specific players based on different factors such as those with the most coins, who’s attacking you or if you just have a personal vendetta. Players can also spend their earned coins for additional power-ups.

But like most canonical pop culture stuff, fans have already beaten them to the punch. A fanmade version named Mario Royale made waves last year, which allowed 75 players to battle it out. (As expected, Nintendo removed the game.)

While it’s technically for free, Super Mario Bros. 35 is a Nintendo Switch Online exclusive. Users will need a paid subscription to the service, plus an account that isn’t set in the Philippines (hint, hint). Players shouldn’t delay downloading this one too—the game will only be up till Mar. 31, 2021.

SHAREIdeally used for bringing your daily needs to the function.   SHAREComments

Dark academia: An intriguing aesthetic I discovered a bit late