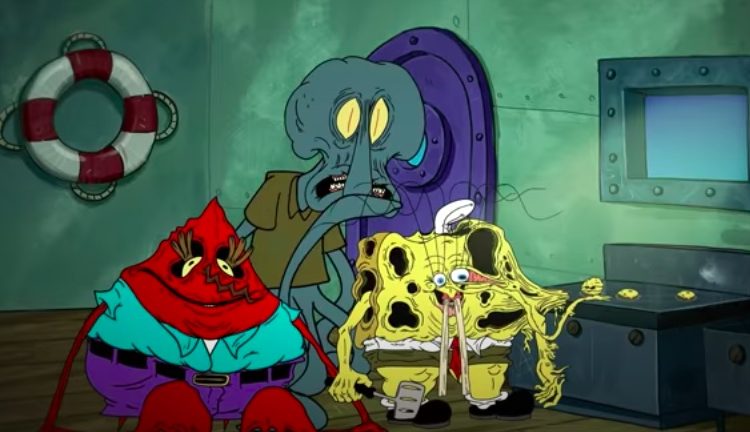 It’s a Friday night and I’ve exhausted all the energy I could muster for work this week. The last thing I wanted is to be called out by my favorite fictional character, yet here I am.

YouTube channel-slash-pop culture parody lair Meat Canyon made a bold decision: to tell the story of late capitalism through the lens of one of the most motivated, optimistic, hardworking creatures in cartoon history. In its own Spongebob spin-off “Secret Formula,” Meat Canyon lets us meet Spongebob in Krusty Krab, busy frying patties… and thoughts.

Sounding like a lost ASMR, SpongeBob receives feedback on how customers can’t get enough of his service. “They want more of that secret formula,” Squidward tells him, almost hypnotically. Well, this secret formula isn’t something Plankton’s chasing—it’s more of Spongebob’s (tough) love for his dream job.

It gets all too real when Mr. Krabs enters the frame. “Was that good for you? Did I satisfy you all?” Spongebob asks. Mr. Krabs answers, “You did, me boy. But you’re all used up.” Then, he and Squidward proceed to gobble what’s left of the worn-out, drained fry cook’s body.

If there’s anything similar between this video’s Spongebob and the real Spongebob we’ve grown to love (or hate), it’s his tireless dedication to his job. However, we learn the horrors of it this time around.

“I love my job at the Krusty Krab. I wouldn’t change it for anything in the whole world. I make people happy. I fulfill their needs. Frankly, I don’t think I could stop even if I wanted to. But who would want to stop, if people love what you do… this much?” he says in a monologue, topping all Spongebob creepypastas that ever existed. After all, there’s nothing scarier than reality, right?

SHAREEver been told by a pal how all you need to have a...