When I was a kid, I asked multiple people what God looked like. I received a variety of answers:

“Just look at the sculptures; he probably looks like Jesus because they’re the same”

Or, I’d get a shrug because it can’t be determined. I stopped anatomizing God’s image among the people around me because it’s difficult to talk about religion in this country. Especially back then.

But, as a Catholic, I was hardwired to think that God was male. I probably shared the same thought with tons of Filipinos given that we’re called Asia’s bastion of Christianity. It starts with the pronoun—God is a He. “Through Him, with Him and in Him,” the priest would say during the doxology. He is also dubbed “The Father.” Though some religious sources claim that the omnipresent God is genderless, many have witnessed the evident patriarchy predominant in the religion.

Eula Junina M. Blanco, a young philosophy professor at the University of the Philippines Los Baños, is one of these. After earning her BA in philosophy at the same university, she took up a Master of Arts in philosophy at the University of the Philippines Diliman. From there, she crafted her thesis that sparked different reactions online: “God is not Male: Obliterating False God Projections from Women’s Consciousness.”

On Dec. 9, 2020, UPLB’s Philosophy Division congratulated Eula for successfully defending her study. Though it’s easy to react to what the thesis offers with the title, we thought of reaching out to Eula to further understand its motivations and layers. Reflecting her interests in feminist philosophy, ethics and philosophy of religion, this interview shows how the study’s aim is more than just to prove something wrong.

What motivated you to pursue the topic?

Religion is generally considered a sensitive and difficult matter to discuss, so people tend to avoid the topic. However, while many believe religion is a personal choice, I think they forget that it is a social activity. Religion is powerful in its ability to shape our values and influence the way we perceive and behave, and its effects are not limited to the personal but is pervasive within the social and public aspect of our lives. So if we fail to recognize how religion, a powerful social institution, operates within a patriarchal social order, we also fail to recognize how religion becomes a tool to sustain gender inequality within society. Moreover, feminism seems to be gravely misunderstood, so by writing this thesis, I wanted to introduce feminism as a movement that aims for equality vis-à-vis religion, specifically Christianity.

Did your own religion affect your thesis proposal?

Yes, it is my religion that drove me to all these realizations. While religion can be liberating for some, it can also be debilitating for others. We must remember that religion does not only pertain to the scriptures and doctrines. How religion is practiced, and how its followers (mis)understand its goals and teachings is a reflection of the institution. So when religion becomes a sustainer of sexism, some people may choose to reject their religion or reject the belief in God altogether. What inspired me to write this thesis is the quest for a God-belief that is consistent with the goal of empowering and liberating women. 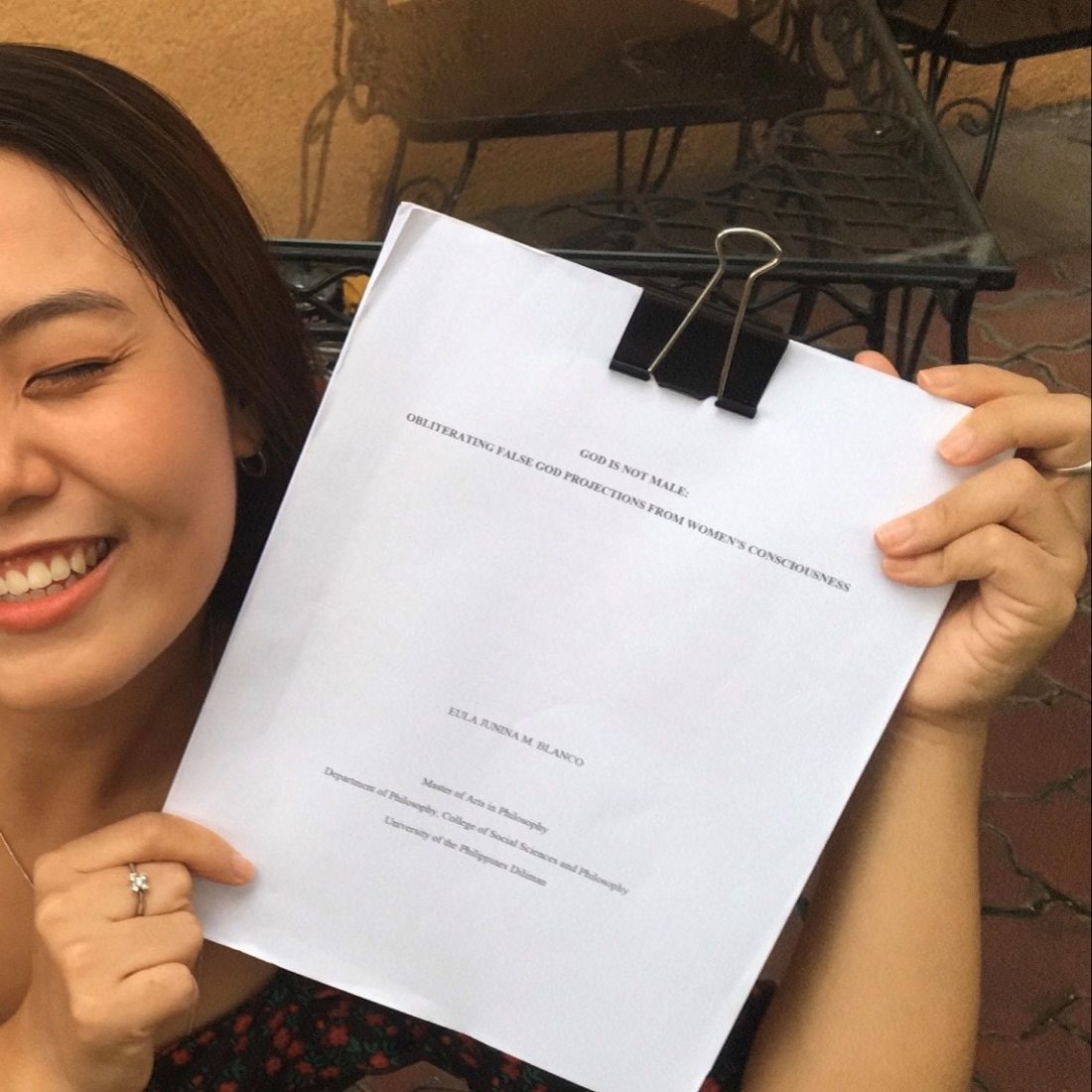 What inspired me to write this thesis is the quest for a God-belief that is consistent with the goal of empowering and liberating women.

What was your first memory of religion?

There is no specific memory that stands out, but religion has played a part in my life ever since I can remember. My family and relatives are all devout Catholics, and I was taught to pray and attend mass at a very young age. I attended a Catholic school in elementary and I remember being active in various church activities.

The main goal of my thesis is to provide a feminist alternative to traditional belief in God (God-belief for the sake of brevity) that does not involve Goddess theology or the rejection of God-belief. My aim is to show that God-belief can be compatible with feminism through critical analysis.

Hence, when we understand God as the First Cause, we recognize God to be the principle of being that makes existence itself possible.

Hence, when we understand God as the First Cause, we recognize God to be the principle of being that makes existence itself possible. Accordingly, as the cause of the existence of everything from nothing, God transcends all things, which leads us to the idea that God the First Cause is wholly other.

To further strengthen my point, I also adopted Mary Daly’s call for the effacement of what she calls false God projections. The idea is to explain that by redefining God as First Cause, we move away from a God-belief that operates under the values and ideals of patriarchy. 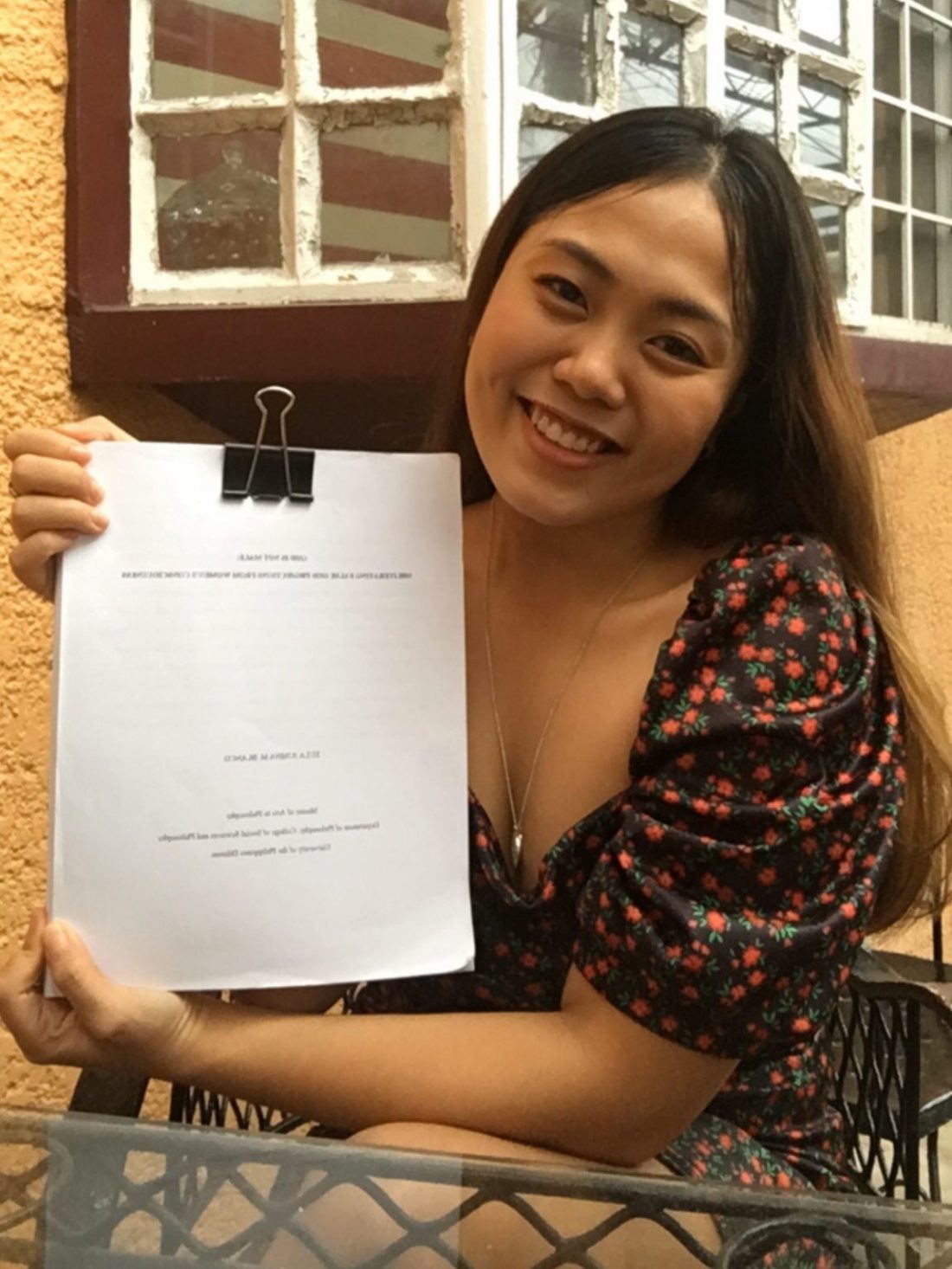 In our country, it’s still difficult to openly discuss, much more question, the aspects of Catholicism and Christianity. How challenging was this for you in producing your thesis?

If we really want to achieve a better understanding of religion and its implications, we have to be ready to talk about it. Especially in a country like ours where religion takes a major place in the private and public aspects of our lives, it is only by discussing it from our unique perspectives and worldviews that we can engage into the criticism and correction of our established beliefs.

Again, we have to remind ourselves of the communal aspect of religion. It influences and even dictates our moral valuation, reasoning and decision making. The more we avoid the topic, the less we know about it, and the more difficult it is for us to rectify the wrongs it entails. Almost always, God-belief is equated to Christianity, so I was not surprised when friends and family who are devout Christians expressed their confusion or disagreement.

The reception of it is different when I discuss it with my colleagues and mentors, and I think the reason for that is the shared understanding that God is not exclusive to religion. God talks are also quite normal within the philosophical community, so it was not very difficult to approach the topic.

Again, we have to remind ourselves of the communal aspect of religion. It influences and even dictates our moral valuation, reasoning and decision making. The more we avoid the topic, the less we know about it, and the more difficult it is for us to rectify the wrongs it entails.

Why is it important to smash patriarchal beliefs in religion?

It is crucial to identify religion as a powerful, social institution that operates through and for patriarchy, and it influences our social and moral lives in ways that we do not easily recognize. The scriptures and religious authorities are regarded with absolute truth, especially by an uncritical and impressionable audience.

While it is correct that religious texts could be read positively and can influence positively, it does not provide any substantial good for the feminist cause, especially if the general practice that results from the belief are still marked by bias and prejudice.

The sexism seen in religion (both in text and in practice) cannot be counterbalanced by such positive interpretations because the bigger context that surrounds all existing institutions remains patriarchal.

If we aim to uphold morality, we must ensure that we define it not in male terms, especially when it comes to issues that concern women. The problem with male ethics and morality is that it fails to take into account the genuine experiences of women. The focus becomes more on how it affects them, sometimes to the point of disregarding how it affects us. Criticizing religion is one of the crucial steps in building a more inclusive and just society. 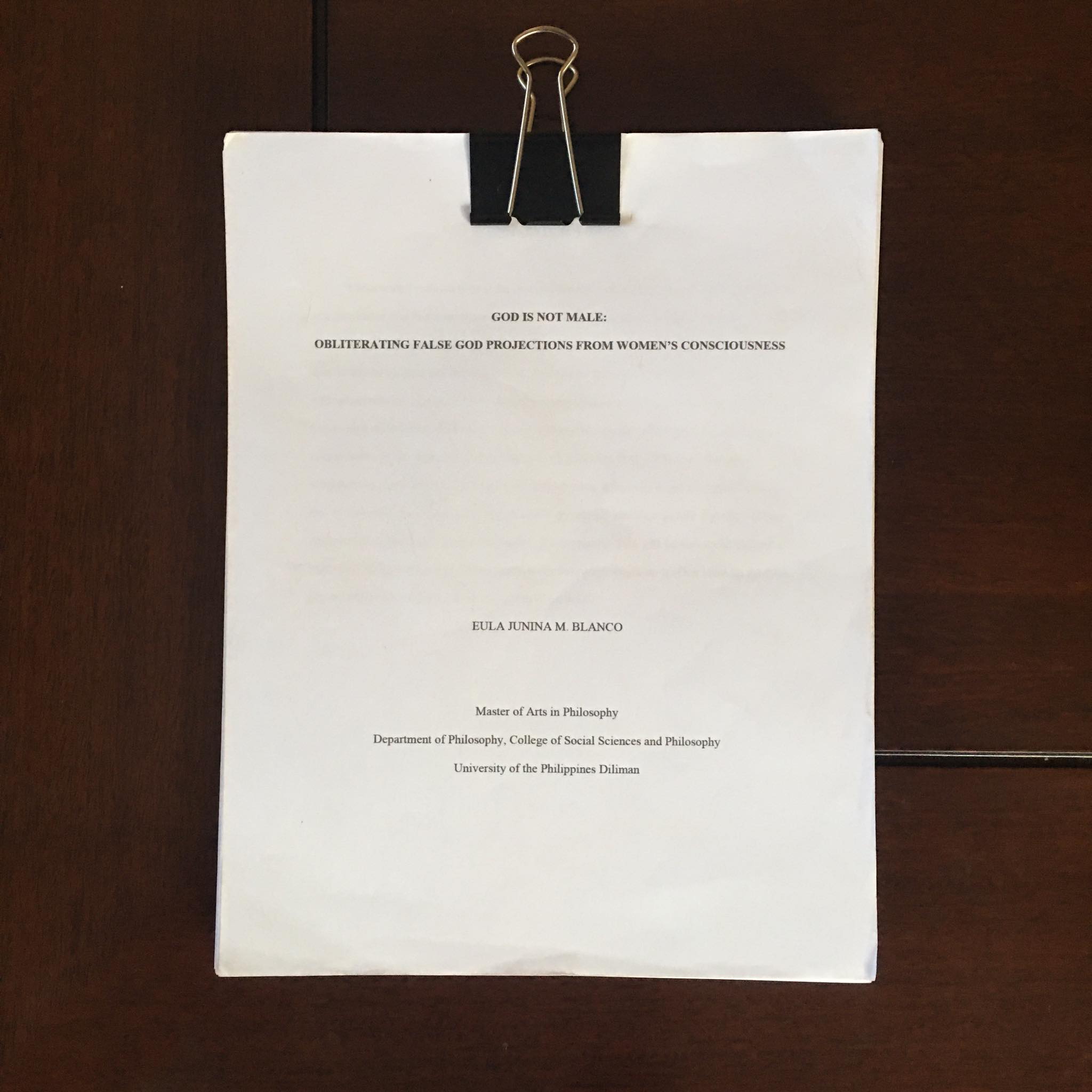 Is there any way to access your thesis online?

My thesis will soon be made available at the University of the Philippines Diliman library.

What do you want people to remember after reading your thesis? Any specific hopes that you want for this thesis?

Conformity and blind obedience to the rules and roles that patriarchal religion imposes will only serve to nurture sexism. So if we seek to undermine patriarchy, we have to commit ourselves to the criticism and correction of existing beliefs and practices.

I hope that this thesis ignites more discussions on feminism and religion and that it empowers women to break away from the dictates of patriarchal religion, constitute a space in which they can create their own meanings, modify the existing conceptual systems that exclude their genuine experiences and concerns in social, political and ethical theorizing, and grapple against the sexually hierarchical society.

SHAREThese are trying times for Filipinos in this political climate. From taking down...