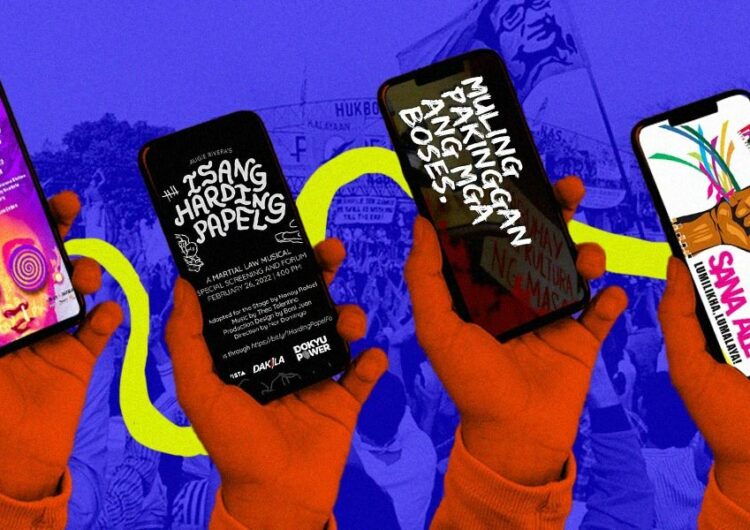 “The method of teaching was also inaccurate, and they were not taught … about the atrocities that happened,” University of the Philippines professor Nancy Kimuell Gabriel said in a recent forum remembering the 1986 People Power Revolution. According to a report by Inquirer, Gabriel further revealed that based on her students’ essays, Martial Law wasn’t taught in a way that would encourage critical thinking; they were mainly tasked to memorize dates and proclamation numbers.

It wouldn’t even take an hour for us to spot at least one chunk of fake news on our feeds. This, along with many other factors, complete the recipe for historical revisionism. But some spaces on the internet, however, still stand to provide information on our history, or produce art inspired by real events we should never forget.

In remembrance of our country’s fight for democracy in 1986, here are virtual events lined up for the long weekend—from screenings to roundtable discussions.

Hosted by journalist Ces Drilon, folks are invited to unpack the burning question and analyze the links between the past and the present in this Facebook Live forum. Happening on Feb. 25 from 4 p.m. to 6 p.m., this discussion also welcomes speakers Dr. Maria Serena Diokno, Atty. Andy Bautista, and John Nery. This is part of Fil Docs x Dakila’s Dokyu Power, a commemoration of the Filipino people’s power, which runs until April 9.

Also part of the Dokyu Power six-week series is a screening of Lauren Greenfield’s “The Kingmaker.” If you (or your friend) haven’t seen this, don’t miss the chance. Cinema Centenario announced that the documentary—which examines Imelda Marcos’s opulent life and how her family has tried to regain power—is available again to stream. Catch it on their virtual movie house MOOV from Feb. 25 to April 9.

For this year’s edition, the annual multi-arts fest hosted by the Cultural Center of the Philippines is packed with online events that highlight the EDSA uprising’s history and other sociopolitical themes. Happening from Feb. 26 to 27, everyone is invited to join a lineup of radio drama reenactments, roundtable discussions, and dance films like “Gastador,” which portrays greed and fanaticism.

Adding to the list of Martial Law-related films you can watch is “Mga Boses sa Pader,” a short by Cratesprout Film Productions. According to their page, this film follows a woman who becomes deaf because of the Marcos regime’s corruption. She visits the house she was raised in to collect old CDs, a wishful attempt to bring back her sense of hearing. Awarded best picture in the University of Santo Tomas’ 16th Sine Reel festival, this film can be streamed on Feb. 25 to 26 on YouTube. More details to follow.

Looking for children’s stories that are brave enough to explore complex sociopolitical issues? One of them is “Isang Harding Papel” by Augie Rivera. See it come to life as a musical on Feb. 26 at 4 p.m. Streaming on Dakila’s Facebook page, this story centers on Jenny, a child of Aling Chit, a political detainee during the Martial Law era. Whenever she pays a visit, she offers her mother flowers made out of old newspapers.

In our battle against one of our biggest enemies (a.k.a. misinformation), different university organizations have teamed up to create “Fact-Check Muna,” a roundtable discussion that’s set to dissect social media’s role in debunking wrong information about the EDSA Revolution and Martial Law. Senatorial bet and Martial Law survivor Atty. Neri Colmenares will open the program, while Alfonso Manalastas and Mike Pante will be in the speakers’ seats. Hosted by Michael Francis Morales, folks can catch this event at Bicol University UNESCO Club’s Facebook page. Register here (along with a relative who’s vulnerable to unverified “news”).

SHAREKorean boy group BTS presenting for half-Filipino R&B musician H.E.R. is one of...

Who asked for a new ‘Fairly OddParents’ live-action? Because, uh, you got your wish