With mandatory on-site reporting, teachers are being left behind, too 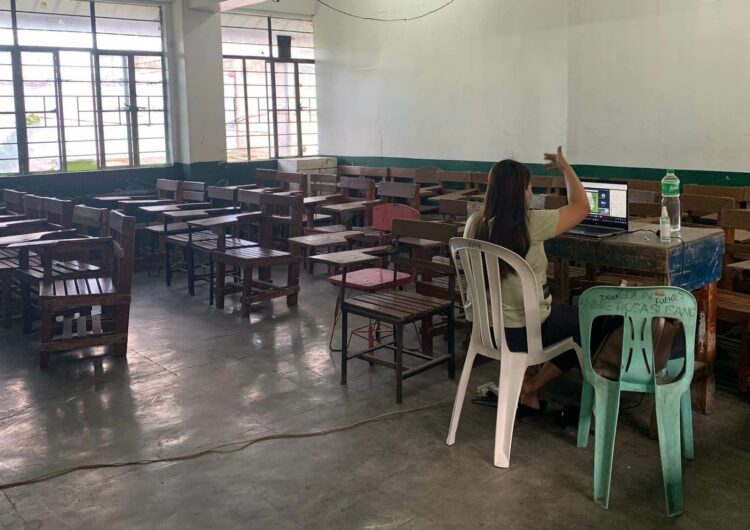 The education sector continues to stay in a long-running predicament, and that’s not just counting last week’s history 101 debacle. Aside from students, teachers have faced the brunt of the oft-dubbed crisis, in part because of a mandated rule on on-site reporting.

According to the guidelines of the Inter-Agency Task Force for the Management of Emerging Infectious Diseases (IATF), government agencies in areas under alert level 1 are required to have a 100 percent on-site workforce. That, in turn, includes teaching and non-teaching personnel, which the Department of Education (DepEd) Memo No. 29, series of 2022 covers.

But as figured, it doesn’t always do well when enacted in the real world. Public school teachers mandated to work on-site—despite classes still being largely online—have faced their own set of struggles due to the lack of proper infrastructure.

As reported by Inquirer, several teachers in Quezon City have resorted to holding classes in corridors for stable internet connection, while some have turned to teaching inside noisy faculty rooms, much to the complaints of students who can’t hear them properly.

“If we are here but there are no students, what is the sense of this kind of system?” said social studies teacher Mary Joy Valenzuela.

Certain teachers’ organizations have also voiced dissent against the memo.

“Forcing a blanket policy among teachers—and without any prior consultation—unnecessarily puts teachers in more challenging conditions, without any guarantee of support from DepEd, and while further impeding education delivery,” reads a statement by union president of the Alliance of Concerned Teachers-National Capital Region (ACT-NCR) Vladimer Quetua, which cited that 87.6 percent of 9,254 surveyed teachers considers the campus internet connection insufficient for hosting classes.

Meanwhile, DepEd officials addressed the memo in an April 19 press briefing, saying that teachers are considered government workers and that their “official work station” is their respective schools.

(We understand that there are internet connectivity issues, but in my understanding, schools are already addressing these issues.)

ACT Philippines also cited that despite the suspension of classes from May 2 to 13 due to the elections, teachers are still required to report to school.

Quick reaction to DepEd's 'May 2-13 no classes, but teachers to continue reporting':

It is beyond ridiculous to force teachers without election duties to report on-site while schools are being prepared to serve as voting centers for the May 9 polls. pic.twitter.com/YyF5XfwAR5

“We urge DepEd to review the nature of teachers’ jobs and heed the many issues being raised before them, instead of hashing out senseless orders that serve no clear and justifiable purpose,” the statement reads.

The seemingly counterproductive measure feels like, in ACT Philippines’ own words, another “senseless and unnecessarily burdensome work order” that teachers have faced in the past two years. Since the start of the pandemic, students and teachers alike have grappled with the effects, with educators overworked and underpaid, and some resorting to crossing rivers just to deliver modules.

Fast-forward to the present, teachers are still asking to be heard. As the days go on and the quality of our education comes under scrutiny, we’ll need to note that good education isn’t just about knowledge and productivity—it also means both students’ and educators’ well-being are prioritized by the government.

Read more:
With online classes, teachers and students share the same struggle
Lady Gaga would be proud of this valedictorian’s graduation speech
Suicide and mental health are no laughing matters, DepEd