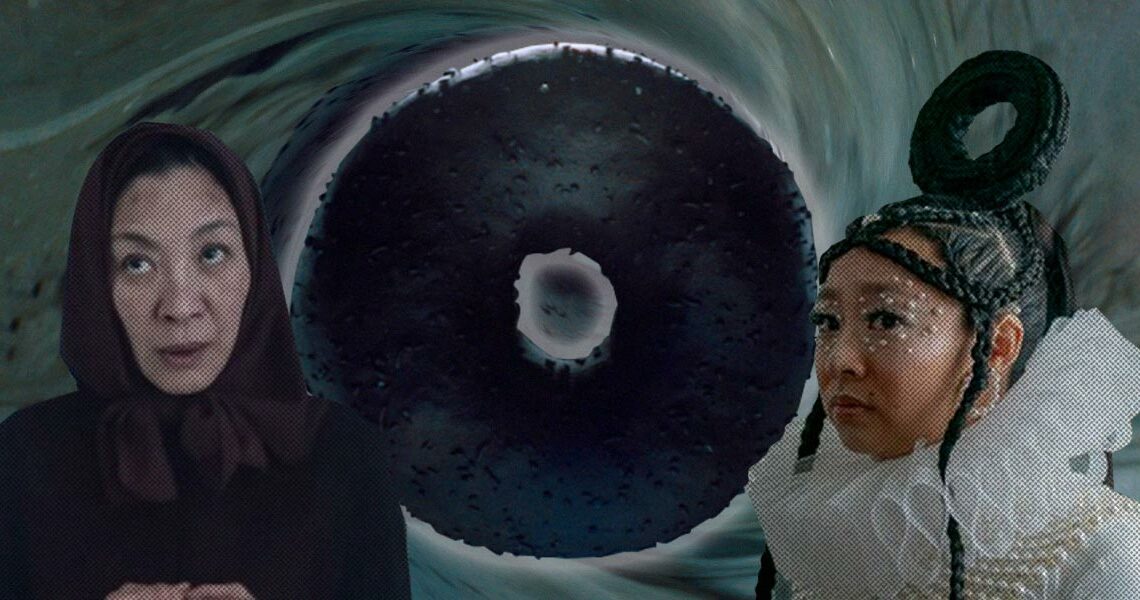 [Spoiler warning: This article dissects scenes from “Everything Everywhere All at Once”]

“Everything Everywhere All at Once” is a genre triumph. The past few years of cinema history have tried their damnedest to nail the multiverse concept—Marvel had its hits and misses, “Rick and Morty” occasionally overdid it and “EEAAO” feels like a culmination of all these attempts, its themes honed to a razor’s edge.

I believe that the film’s artistic success has to do with the thoughtfulness of its philosophy. Every multiverse movie has to grapple with philosophy whether it wants to or not, and “EEAAO” does it with aplomb. To see how, we have to look at the movie’s enigmatic plot device: The Everything Bagel.

The Everything Bagel and the Owlman Bomb

The Everything Bagel functions like a black hole vortex. It’s so heavy with the weight of all reality that not even light, not even every possible life we can live, can escape. When the film’s antagonist (anti-hero? anti-villain?) Jobu Tupaki (Stephanie Hsu) reveals the bagel to reluctant protag Evelyn Wang (Michelle Yeoh), it tonally feels like some mad doctor showing a secret agent their doomsday device. It’s the film’s MacGuffin, content to drive the plot forward and stay in the background, while more emotionally resonant themes, like the healing of generational trauma, take center stage.

And yet the Everything Bagel is essential for the film’s tensions to resolve in a satisfying manner. In order to understand why, it might help to reference… Batman. Kind of. Not the Robert Pattinson flick, no. We have to go further back.

Believe it or not, the DC animated movie “Justice League: Crisis on Two Earths” has a villain who best demonstrates Jobu Tupaki’s philosophical pessimism. Owlman, the evil version of Batman (yes, it’s very on-the-nose, as the superhero genre usually is) orchestrates a plan to detonate a world-destroying bomb on a place called Earth Prime, a planet that also happens to be the origin point from which all other worlds branch out from. Blow that world up, everything else blows up. DC logic isn’t hard to follow. When Owlman reveals his plan, his reasoning is: “I choose to make the only possible real choice.”

Owlman and Jobu don’t have the same exact plan, but both subscribe to a certain flavor of pessimism. While Owlman aims to abolish the cosmos itself, Jobu aims to remove herself (and Evelyn Wang) wholesale from reality. Even the way she explains her view of the world describes the abundance of possibility as a terrifying thing, and therefore grounds for the extermination of human life, whether that’s everybody or just themselves. “You see it all, don’t you? You can see how everything is just a random rearrangement of particles in a vibrating superposition. […] But you see, how everything we do gets washed away in a sea of every other possibility.” To her as well, no other choice matters, except the destruction of choice.

To assume the mistake and to go to the end

Jobu believes that we’re all fucked because of the natural order of things. Slovenian philosopher Slavoj Žižek (a thinker who is amusing as long as you don’t take him very seriously) might agree. In an interview, he states:

“What we call creation is a kind of a cosmic imbalance, cosmic catastrophe, that things exist by mistake, and I’m even ready to go to the end and to claim that the only way to counteract it is to assume the mistake and to go to the end, and we have a name for this; it’s called love. Isn’t love precisely this kind of a cosmic imbalance? […] Love for me is an extremely violent act.”

Jobu attempts a super messed up articulation of love, and invites Evelyn to enter the void with her–to gaze into the abyss. This is the turn in the film where Jobu is re-framed not as a villain, but as a reluctant god who wants nothing more than to exit reality, extending compassion to someone who also sees everything. And yet Evelyn turns her eyes away from the abyss, and is distracted by what she deems to be more pressing needs (read: the boring-ass minutiae of everyday life) and escapes the abyss’s gravitational pull.

It’s a move that echoes what Batman says to Owlman. “We both looked into the abyss. But when it looked back at us, you blinked.”

Jobu blinked; Evelyn beholds with an unflinching googly eye. It’s ridiculous, and precisely why it works. It is as though Evelyn is the one who truly embraces the utter fucking chaos of what it means to be alive.

By responding with love, Evelyn adds to chaos with even more chaos. That’s why she wins.

It is de rigueur at this point for a multiverse position to take the pithy philosophical stance of “nothing matters, therefore everything matters,” and that’s fine. It’s nice to be reminded. But “EEAAO” takes it just a step further into absurdity… with googly eyes. Jobu rejects existence, while Evelyn, in Žižek’s words, assumes the mistakes and goes to the end. By responding with love, Evelyn adds to chaos with even more chaos. That’s why she wins.

We could stay here in this roiling territory of thought and never stray far from the themes of generational trauma that make “EEAAO” so heartrending. When we think about generational trauma, we contend, perhaps unconsciously, with the ugly thought that choice might be an illusion. My mother has been hurt by her father, she hurts me. They both tried their best, but what’s the point? It doesn’t take away the pain, it doesn’t take away what she’s done. In this way, I inherit my mother’s brokenness, I can only do harm. To be caught up in this vortex of thought, it’s very easy to entertain the idea that the only cosmically logical choice is to never have children. To discontinue life.

No one’s here to go on a diatribe against antinatalism—if you don’t plan on having kids, more power to you, I don’t plan on it either. Nonetheless, Evelyn responds to Jobu’s pessimism by meeting her where she is, and taking the cosmic imbalance to the end. By coming to terms with her upbringing in order to best love her daughter, Evelyn and Joy Wang come to a semblance of closure, and we as an audience are led to believe that Evelyn breaks the cycle of generational pain. In other words, she made a meaningful choice.

Contemporary philosopher Eugene Thacker would probably come down hard on Jobu Tupaki. In his book “Cosmic Pessimism” he writes:

“Pessimism is the lowest form of philosophy, frequently disparaged and dismissed, merely the symptom of a bad attitude. […] No one needs pessimism and yet everyone–without exception–has, at some point in their lives, had to confront pessimism, if not as a philosophy then as a grievance—against one’s self or others, against one’s surroundings or one’s life, against the state of things or the world in general.”

The Everything Bagel represents the failing of pessimism, one that wants to posture an above-it-all cynicism and yet is horrified by the idea that life isn’t all about you.

Like a mad scientist’s doomsday device, the Everything Bagel puts forward a solution that isn’t really a solution at all. The Everything Bagel represents the failing of pessimism, one that wants to posture an above-it-all cynicism and yet is horrified by the idea that life isn’t all about you. It is purely destructive and never restorative. The Everything Bagel, much like a nihilistic edgelord ex-boyfriend, subscribes to doom and is therefore doomed to fail.

It is very likely though that most, if not all of us, have constructed our own Everything Bagels, our own philosophical doomsday devices. As Thacker says, everyone has done this, no exceptions. In these moments of despair, it doesn’t help that much to imagine Sisyphus happy. So what do you do? If the Everything Bagel is a desperate, futile attempt to wrest order from chaos, the solution is to embrace chaos. A synonym of chaos: possibility.

In conclusion: Why did you cry during the rock scene?

Let’s talk about that.

The plainness of it is dazzling to behold. It’s literally two rocks talking to each other. No sound. I wish I saw this scene in a movie theater. The scene establishes a landscape of desolation, a universe where life never had the opportunity to form, and therefore a place where Jobu feels most at peace.

But she’s not alone anymore in this place. That’s a mother and a daughter. As they talk about the pointlessness of things, there’s a moment in the scene where Evelyn’s and Jobu’s sense of humor line up and they share a laugh. It’s a feeling that mothers and daughters know well, a moment where all rough edges are sanded away for the span of a moment. It is a moment that feels as chaotically improbable as the Big Bang occurring in darkness. And yet it happens.

Love disturbs the silence of the rock scene. It’s quiet. It’s two rocks talking. Love introduces disorder. You cried during the rock scene because it felt like there was nothing, and then there was something, and it shook you up. Didn’t it feel like a violent act?

Photos are stills from “Everything, Everywhere, All at Once”

SHARE2020 is turning out to be a crazy year. Just this week, everyone...

SHAREMore often than not, a local kid’s first exposure to cartoons starts one...

SHAREGoing to the Thank You PH gift shop opening was like witnessing the...