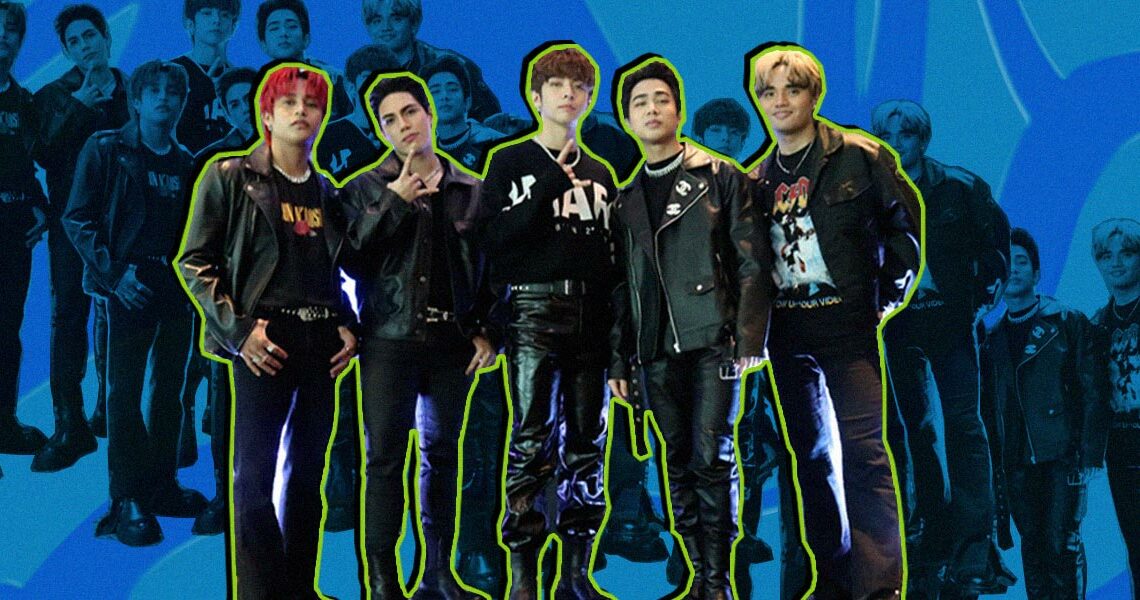 Ah, time-traveling. Pop culture feeds us never-ending reimaginings about it. People like romanticizing the idea as an escape from the present, and centuries later, we’re still trying to figure out if it’s possible. (Well, science does say it is—but it’s not exactly the “hop on this time machine” kind. For now, at least.)

While that kind of technology hasn’t been born, what helped me gravitate towards the concept recently is SB19’s comeback track “WYAT (Where You At),” which comes with a music video that zooms through various decades. The members of today’s biggest P-pop group transform through their ’fits and get transported to various locations, giving their own spin on timeline-jumping. But how would this unfold if given the chance in real life?

In a recent press event before kicking off their “WYAT” concert tour encompassing cities from Manila to New York, I had the chance to briefly talk to Pablo, Josh, Ken, Stell, and Justin. Now that they’re set to tick off one of their biggest career milestones—and with A’TIN cheering them on to boot—how would the scene play out if they were to take a peek into their past, especially at the start of teenhood, a stage that’s often complicated and confusing? Whether it be advice or validation, what would they tell their 13-year-old selves?

SB19’s message to their 13-year-old selves

A brief collective pause wrapped the boys, who were seemingly trying to get into their younger versions’ shoes. Justin was the first to answer in detail. “Siguro po, I would advise [myself] to explore more, sulitin niya ’yung oras niya to do [and] to learn more about, siguro, music, kasi ’yun ’yung ginagawa ko ngayon. And nung childhood ko, hindi ako masyadong into music talaga,” he says, adding that he’d ask 13-year-old Justin to practice as music would be useful in the future.

(Maybe I would advise [myself] to explore more, make the most out of his time to do and learn about, maybe, music, because that’s what I do now. And during my childhood, I wasn’t really into music that much.)

For Pablo, it’s a bit of the opposite. “Play more,” he laughs before adding, “Kasi ngayon puro trabaho eh (Because now it’s all about work). No time with family.” Though he knows these are all for his personal development, he said it would be nice for younger Pablo to enjoy his childhood by exploring and interacting more with other people.

Josh agrees to this. “Cherish the moment,” he declares, explaining how everything changes in a blink of an eye. You might not notice that a lot has already happened—and then you’re older. “Alagaan mo mga tao sa paligid mo, ’yung mga natutunan mong bago pahalagahan mo (Take care of the people around you, and give importance to the new things you learn),” he says, unpacking what “cherishing the moment” means for him.

Like Justin, Stell also touched on the idea of growth, especially in the aspect of music: “[Honestly] nahihirapan po ako sa ibang side when it comes to music po talaga (Honestly I struggle with some aspects of music).” He mentions that every day is a learning process in singing, and he thanks their vocal coach for his recent discoveries, making him wish that these are things he had learned about earlier.

The mood grew more nostalgic as Stell revealed his regret of not having a lot of pictures and videos of his younger self. “Sa team kasi, dahil nga po meron kaming ‘WYAT’ concept, naisip naming maglabas ng mga baby pictures. Narealize ko, ‘Bakit wala akong masyadong baby pictures and baby videos?’” Stell from the past, you know what to do.

(In the team, since we had the “WYAT” concept, we thought of pulling out some baby pictures. Then I realized, “Why don’t I have that many baby pictures and baby videos?”)

Meanwhile, Ken summarizes his message in two words: “Good job.” This badge of approval is inspired by him embracing his imperfections through the years. “As a kid, magkakamali talaga. And kahit pa growing up, magkakamali, and habang lumalaki, mas malaki ’yung pagkakamaling magagawa mo.” These mistakes evolve into lessons in the long run, and he believes he wouldn’t be where he is today without them.

(As a kid, you’ll definitely make mistakes. And even once you grow up, you’ll still commit mistakes, and the older you get, the bigger your mistakes will be.)

Did their 13-year-old selves have the same dream?

Further racking their brain cells on the talk of revisiting the past, press conference host Bea Pinlac thought of probing the boys: Did they already dream of becoming musicians at 13?

It’s a yes for Pablo, who started writing songs as early as 12 to 14 years old.

Justin and Stell already imagined themselves in the limelight as well, but as actors. “Mahilig akong mag-acting acting sa bahay (I liked acting at home),” Justin reveals.

(I would look in the mirror, check if I look good when I cry, then I’d think, “Why do I look ugly?”)

In contrast, Ken—who originally wanted to delve into sports—wasn’t the biggest fan of the idea of performing. During the school’s foundation day, he’d try to escape any opportunity to sing. But music seemed to have followed him from the start.

(Whenever my uncle would play, I would sit there alone and watch him performing with his eyes closed. That’s where I got hooked and realized how beautiful the sound of music is.)

However, for Josh, what he saw as a “goal” during childhood did not exactly equate to a career; it was more of how he’d like life to play out.

(We already had a lot of problems when I was a kid, so I already had this deep understanding of life and I’d think, I don’t have time for these kinds of stuff, [so] I only got to pursue these now. All I wanted before was my family to be okay, sustainable, and just be happy. My life was dramatic back then. It’s like I just wanted a normal, happy family.)

Despite what looked like entirely far-off paths, the boys of SB19 managed to assemble, own the spotlight, and make their own history. Now, they’re set to expand this circle as they further take over the globe.

10 thoughts on zooming through eras with SB19 IN ‘WYAT’