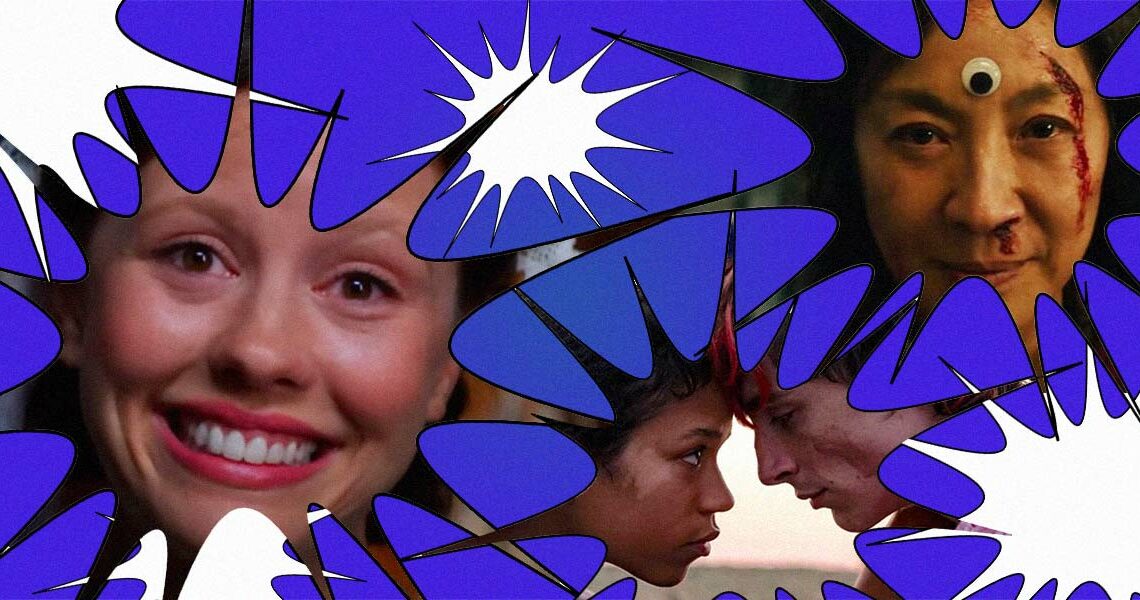 “What the fuck?” is arguably the most used catchphrase of 2022 and for good reason: inflation rate constantly ballooning, Filipinos being considered the most stressed out workers in Southeast Asia, climate crisis getting worse, our K-pop biases leaving their groups, Stephanie Hsu getting snubbed by the Golden Globes (IYKWIM)… the list is almost endless.

But if these IRL events didn’t do enough to screw you over (or you just want to fuck your life up even more like us), these films are guaranteed to do the trick. In this edition of Scout Recap, we listed our personal best in cinematic WTFs—from movies that could cause an existential crisis (“Is this real life? Or is this just fantasy?”) to those that you’d think are purely fictional (“There’s just no way this happened IRL!”) but are actually based on real-life situations.

Mia Goth, the inventor of acting, painted a total fever dream in horror-slasher “Pearl,” the origin story of the titular character (previously seen in another 2022 A24 film, “X”). I don’t know what would haunt you the most: that unbothered scarecrow dance, the eerie end credits, or Pearl’s hard-hitting eight-minute monologue—which I’m transcribing in my Notes app as we speak. – Jelou, associate editor

“Everything Everywhere All at Once”

2022 gave us two multiverse movies and dare I say, “Everything Everywhere All at Once” hit it out of the park. Michelle Yeoh and Stephanie Hsu’s dynamic is a cinematic delight and the otherworldly visuals are just the icing on top. “EEAAO” is a film on crack that still tugs on your heartstrings in the most unexpected way it can. I give it two (hot dog) thumbs up. – Yel, designer

Being given a “Based on a True Story” note right off the bat? A fair (and slightly tummy-twisting) warning. In  found footage treatment, “Incantation” revolves around the aftermath of breaking a religious taboo. Upon eventually reaching the end of the story, I felt like I was already part of what was going on, with all the chants and everything else—and I was like, “WTF, I just wanted to watch a movie.” – Mikey, multimedia artist

I wasn’t really curious about how cannibals fall in love with each other nor did I need a visual representation of how they eat their prey while on a road trip—but thanks for the idea, “Bones and All.” I don’t want to spoil much of its plot as it would ruin the watching experience for you, but best believe I’m going nowhere near isolated roads any time soon out of fear of being fleshed and eaten. – Kleo, junior content creator

TBH, I have a huge bias for films based on true stories. One of the gems I found this year is “Thirteen Lives.” Set in 2018, this film retells the rescue operation for the junior soccer team and an assistant coach who got stuck in the Tham Luang Cave in Thailand. I give this film a 10 with how the concepts of realism and suspense were mixed with the event’s stirring narratives and packaged in a two-hour-and-thirty-minute flick. No cap—the incredible mission blew my mind away. – Justine, junior content creator

Photos from “Pearl,” “Everything Everywhere All at Once,” and “Bones and All” trailers

SHAREThe greatest villain in an artist’s life is the creative rut. We’re talking...

This year’s 60th annual Grammy Awards has got some solid nominees up on...