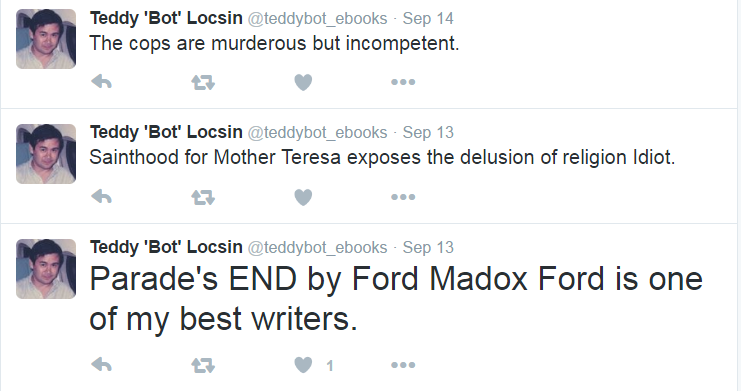 So I’ve been following this bot a day after it was conceived, as announced on a Reddit post, and I felt that today would be a good day to talk about it. Two days ago the former Congressman, TV host, and Twitter rockstar was appointed as the new Philippine ambassador to the UN, and the Internet is quick to rise up and point out why he’s not suitable for the role by sharing his tweets.

Between the original and the bot, which tweets are from what account? At this point it’s kind of easy to tell, but you never know:

Tagalog should be discouraged. So long, so bullshitty, so useless a tongue for debate.

Sir, i-salvage niyo na Lang mga police, there are more where they came from.

Girl, 11 months, snatched from mum’s bed and raped for 2 hours https://t.co/gNzr0whRal via @MailOnline MY GOD, WHAT IS IT WITH THESE HINDUS.

If you’re puzzled about the bot’s name, it’s following the old classic horse_ebooks. I’m actually hoping for more frequent tweets from the bot for more chances of random dank humor; Filipino humor can go well with internet trends to bring light to current events, as I would think. If there’s a way for anyone to copy eloquently copy Mr. Locsin’s way with words, it’s through technology from a soulless entity. I wonder what he thinks about all this. Someone better tweet him.