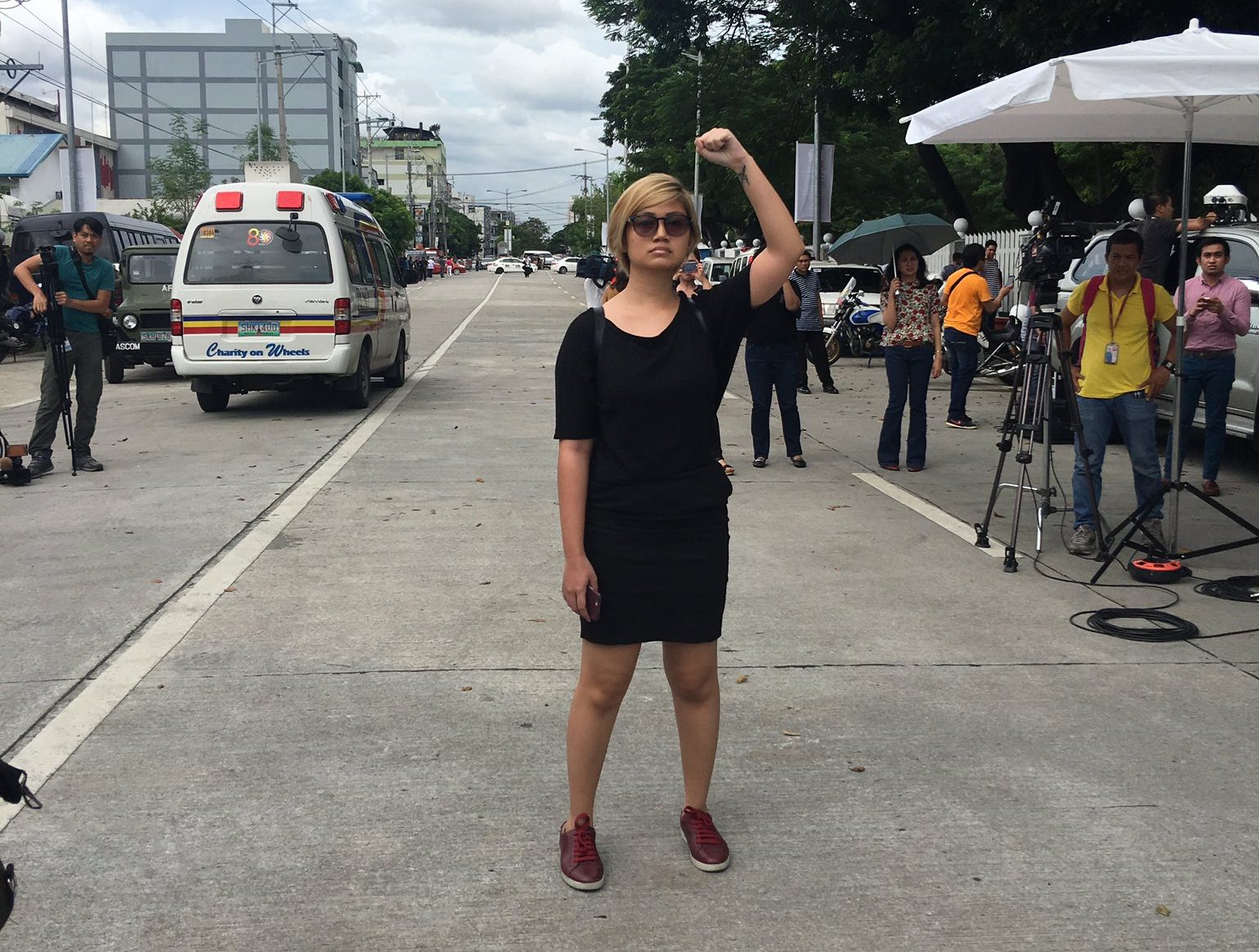 You’ve already heard all the brutal details: the secrecy, the betrayal, the actual gall to fly Marcos’s decaying corpse from Laoag to Fort Bonifacio without telling anyone except his family and supporters so they can bury him at the Libingan ng mga Bayani at noon today.

There are a lot of different angles at play here, ranging from how the president’s own staff didn’t even know this was going down today, to PNP chief Bato dela Rosa admitting that this was the president’s order, to all this being prepared as early as last week, when the Supreme Court rejected the petition to stop it. You know shit has hit the fan and people will be gathering at the streets today, but one positive we’d like to touch on is that the protests did start this morning, through the bravery of one steely soul.

Nicole Aliasas made waves this morning when she was seen raising an indignant fist up all by herself outside the Libingan ng mga Bayani, way before everyone else came. And to be fair, we were all blindsided by it this morning, so it was pretty hard to organize a group over there right away. To do what Nicole did—in front of police supporting the government, and that odd group of Marcos supporters—however, requires a lot of courage and nerve, even more so than going out there with a full group, we think, and proves that not all heroes have to save the city from a giant space invasion.

If you’re wondering, Nicole is all right; in fact, we even managed to talk to her a little bit about today.

This may seem like a silly question, but what were the exact emotions you felt and thoughts you had when you heard the news? I was mad, really mad. I’ve never felt that much need to do something until today. I was so near to Libingan that I knew I would never forgive myself if I didn’t do anything. I was scared hearing that there were no protesters yet. I knew I was going in alone but the conviction in my heart was too strong to ignore. I thought about what this speaks about us Filipinos. All the atrocities during the Martial Law are in the history books. I’ve seen the documentaries. 30 years after overthrowing the dictator, here we are laying him to rest on sacred ground intended for honorable men who truly served the country. I’m ashamed, really, that this is happening. But the fight is not done. That’s why I went there. To fight and to show that I am not allowing this. I am not okay with this.

How soon did you find out about the news, and where were you? How’d you get there first? I was in BGC for work when I received a message via Facebook that the burial was at noon. I was alone, and I wasn’t sure if I would find any other protesters when I get there. In the Uber going to Libingan the driver tuned to a news station. I heard there were many supporters but no protesters seen yet. True enough, when I got there, no anti-Marcos protesters. But I was already there, so what the heck, I’ll do what I came to do. Nobody noticed me until I stood in front of the gate and held my left fist high. Soon enough the media was all over me. They asked me questions, etc.

Did the police harass you in any way? No. What’s funny is that while I was walking on the sidewalk going to the gate, some of the policemen even said hi. I think they were catcalling me but what the hell, that’s not what I came for. Once in front of the gates, I stood about 5 meters from the police line guarding the gate. No one came to drive me away or to arrest me, which I’m very relieved about.

Considering how divided the population is when it comes to this issue, how much action are you hoping to see? But how much will you expect? There are already protests happening all over Metro Manila today, which would all converge at the People Power Monument tonight. I’m hoping to see another People Power Revolution. EDSA 3, if you will. But I know that it is scary, given the outcomes of recent protests, especially with the one that happened in the US Embassy. People might be afraid to go out there because of the way protests are being dispersed recently.

What do you hope all of this action changes over the weekend, if any? I doubt they would still unearth the remains of Marcos, but I do hope this—the truth—will go down in history books. That no matter how much the Marcos family tried to revise history, we the people did not allow this to happen. That Marcos was laid in Libingan in secret, like a thief in the night. That there is no honor and glory on the day of his burial, as people are protesting against it all over the Metro.

What do you have to say to those angry but are still thinking about going out there, of doing any action at all? To those who are already out there? Those already out there, thank you for fighting for this country. But please, please be careful. You can be a hero without being a martyr. Think of your families. Same to those still thinking twice. I totally understand. That’s what I felt, too. I believe you can help in your own way. Sign petitions, hold vigils, anything. But if you fear for your safety, if you have a family, it’s okay not to go out into the streets.

What about to people taking their anger out on those who enabled the Marcoses, whether it’s the government or the voters? Yes, be angry. It is this administration’s fault, and of course those who put him in power, that this is happening now. But please, do so with respect. There can be discourse without being disrespectful, especially when you have opposing political views with your family and friends. In the end, they will be the ones who will stand by us. Educate, do not humiliate. Do not use harsh words or degrading comments. Help them understand where your anger is coming from, in the hopes that they will see the right path.

Photo by Tarra Quismundo for the Philippine Daily Inquirer

SHAREAsia Pop Comic Con has been one of the most phenomenal pop culture...