Split is one of 2017’s first and most highly anticipated Hollywood films, with plenty of good reason. Directed by M. Night Shyamalan, Split tells the story of Kevin, portrayed by a phenomenal James McAvoy, a disheveled young American with a history of abuse and a particularly destructive case of dissociative identity disorder. When a practical joke in bad taste rings up memories from Kevin’s troubling past, three of the twenty-three distinct personalities that reside in his body take turns in the light to protect their host, usher in an ominous 24th personality, and kidnap a few teenage girls while they’re at it.

In Kevin Split, M. Night Shyamalan finds a triumphant, airtight return to form. Shyamalan has a lot of thoughts on the subject of trauma and abuse, and around these thoughts he crafts a gripping, manic investigation with teeth. He masterfully builds worlds and relationships around issues that other, lesser directors might shy away from; queasy things that risk making the audience squirm, or even look away. But Shyamalan is driven by confidence. In Split, he winds an engaging narrative into a showcase of the immersive power of film. Viewers would be fools to look away. 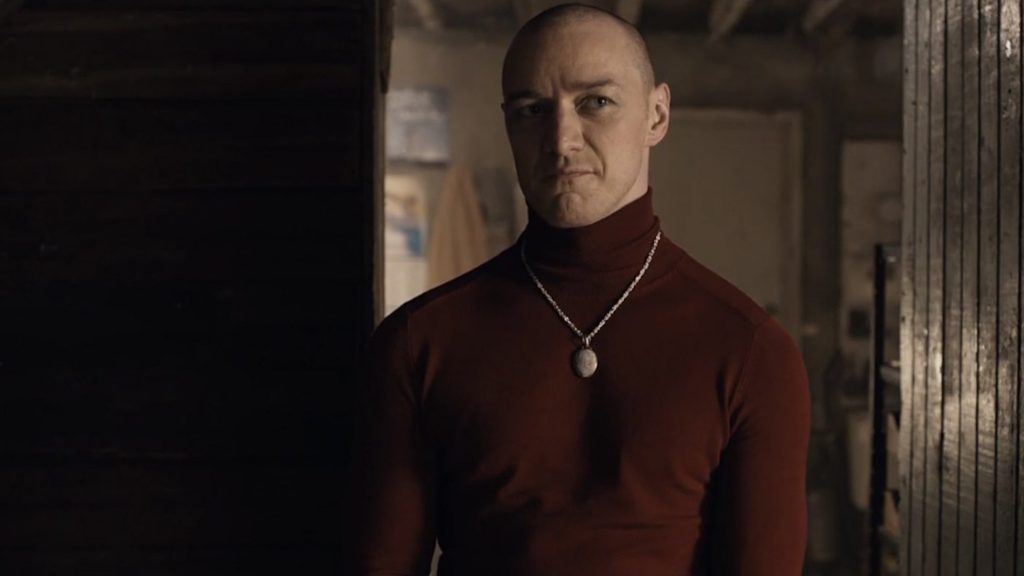 Setting the stage of Split is a team of creatives handpicked personally by Shyamalan. Mike Gioulakis of It Follows notoriety milks every frame, using a keen eye to maximize a relatively low-budget set. The effect is cut after cut of delectable imagery that sets tones as needed. In the hostage scenes that occur underground, the scenes feel harsh and constrained, like they’re gasping for air as they unfold. Flashbacks are as gimmicky as they come but look rightly idealized and embellished by memory. Cutting and memorable imagery shines even brighter with the aid of West Dylan Thordson’s sparse music production, which surprisingly leaves a lot of room for silence. It is Split’s quietest and most minimal scenes that are able to terrify deeply.

There is little editing necessary to communicate to audiences that McAvoy’s Kevin has switched personalities. This is because he masterfully adapts habits and inflections that he executes to crisp distinction. In the oeuvre of James McAvoy, Split will go down as the movie where he did that. He is the character actor of a generation, and we should feel blessed to have him. And arguably the most convincing display of fear in this entire movie comes from McAvoy, who also happens to play the big bad monster, the dreaded 24th personality. How he is able to portray characters that are designed to usher in a monster they’re also terrified of is truly haunting. He lends an irreplaceable layer of thrill to Split’s caustic, underground lair of must and prickly things.

It’s tempting to stay here, to be dissuaded by the outfit that Shyamalan and his talented team have crafted and leave it at that. But Split allows viewers to sit back and untangle the film’s engaging aesthetic little by little. What’s left underneath is an idea that does not thrill or scare as much as it does intrigue. And while a lot of these ideas are unfortunately lectured to the audience via Skype by Betty Buckley’s character, they are worth discussing nonetheless.

At the center of the film is the topic of physical abuse, and the insidious effects that these can have on the psyche. In Split, abuse doesn’t sit on the underbelly of a character, but on their sleeve, as a kind of trademark or branding that ends up explaining everything about said character, their strengths, weaknesses, and unique qualities. One such quality being mental illness.

While Split has drawn flack for an alleged villainization of those with mental illness, it’s apparent that the film comes not from ill will but blithe misguidance. To be fair, Split never calls its musings facts. At most, this film is speculation. It asks, what if people with dissociative identity disorder can not only change but enhance their bodies as they switch from one identity to the next? It’s the stuff of capes comics. But as Shyamalan has done in movies such as 2000’s Unbreakable, he tells this superhero/villain story in hyper reality, without the Technicolor theatrics.

But by granting its characters superhuman capabilities by virtue of their trauma,Splitsuggests that victims should be able to cope by hook or by crook. In this speculation, life grants abuse survivors a mechanism that lets them thrive post-trauma. But this kind of thinking unburdens the abuser, and goes as far as presenting abuse as a gift. Rapists and batterers become responsible for unlocking metaphysical abilities and strength of character. What’s surprising is that these culprits get a surprising amount of airtime, depicted in all their ugly. But even if the film’s emotional shotgun is sometimes turned in their direction, the barrel remains empty. They are off the hook.

Those that are eventually revealed to be abuse survivors are notably superior, and their entire being gets chalked up to their trauma. Split’s biggest flaw is its unabashed treatment of these characters as ways to prove a point, forgetting, in spite of ace portrayal, that characters should be human. These individuals become sad exposition tools for Shyamalan’s big ideas, instead of representations of real victims.

Despite a murky center, Split is an excellently crafted piece of cinema from a director that many have given up on. The film ends on a hopeful note, if not for its characters, then for Shyamalan, who has reinvigorated weary fans while earning new ones. I am one of the latter. Viewers will do themselves good to hitch their wagon to this underground thriller. They’ll do one another even better to question the places Split goes.

Music is an essential escape to most people both then and now. To...

SHARENFX has all the qualities of a young man who’s been successful shooting...