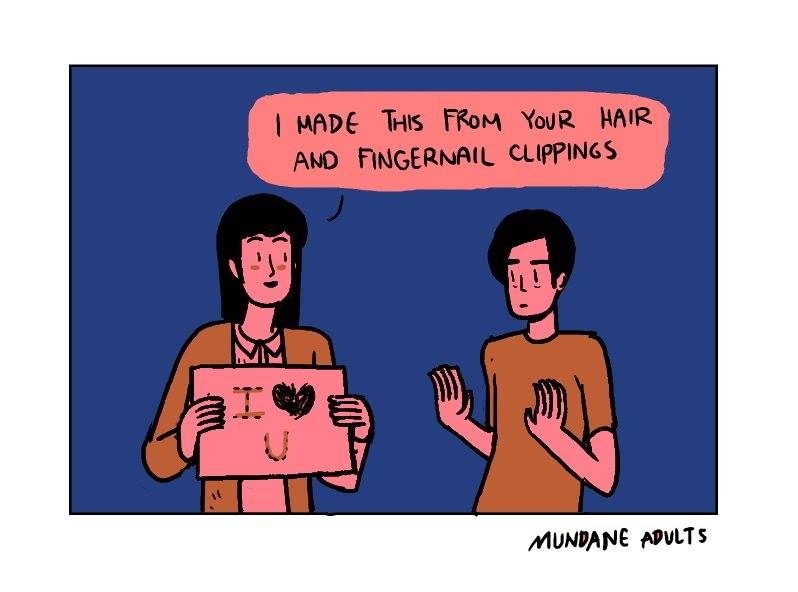 A quick show of hands: who here thought everything—okay, most things—about adulthood wasn’t all that it was cracked up to be? From romantic relationships to working to make your own money and live independently, this shit is not what pop culture and fiction told us was gonna be. You know, everything that told us we could live happily ever after.

Enter Rob Cham, a guy you already know we love (and you might already love) and work closely here on this site. (If you haven’t gotten on our series Misery + Comedy, you’re missing out.) One of Rob’s latest projects is a series of webcomics on social media called Mundane Adults, a bunch of stories illustrating what life is really like, as we learn it the hard way as grownups, after fellow artist Jess Guanco, also known as Grickenfish, came up with the idea while talking with Rob and another artist/Scout friend Dani Chuatico.

“Mundane Adults started out as a joke I made to friends where I would make fun of Sundae Kids and thought Sunday – Monday, kids – adults,” Rob tells us. “I thought Sundae Kids was a little too sweet and nice and sort of encouraging some problematic lines of thinking. [I] drew it while just figuring out my own feelings with relationships.”

The comics are basically realistic, hard-hitting takes on things we’ve all perceived to go smooth and easy, like the comic drawn by Rob above, which tackles people loving too much in relationships and putting their significant other on a pedestal. Naturally, the topics the comics discuss result in a lot of people sharing and tagging friends in “it so u” comments.

The beautiful part, I find, is that Rob’s invited a lot of other comic artists and friends to write and draw their own Mundane Adults strips. Rising local names like Huhsmile, Hulyen, and Janjan Comics, among others, are part of those who’ve already contributed to the series, making sure that the takes are fresh and varied. The artists are free to post their own comics on their own account, usually on Twitter, with the hashtag #MundaneAdults, and Rob will just retweet them.

“[I] had the idea to not really own Mundane Adults and have people just make their own thing if they wanted to,” Rob says of the thing he’s created. “So it’s a crowdsourced outlet for anyone who wants to let out their mundane frustrations, honestly.”

Despite the glib outlook of Mundane Adults, Rob says he isn’t out to destroy the idea of relationships for other people—in fact, he still encourages them to try and make it as good as they can, but it’s not everything in life. The comics are merely a chronicle of how things really are, not an attack on how people think they should be. Or something close to it.

“We all still want it to be the greatest thing ever, and wanting that is not bad,” he says. Rob may just be speaking for himself, but all the other comics written by friends seem to come from a place of some strange optimism, after disappointment. Or, on the other hand, it could be starting to turn into something else completely.

“It’s not my intent, but I realize that showing how relationships are more likely to be might be a nice catharsis of ‘Ah right, other people go through this.'” And from all the reactions to it, they definitely do.

You can also check out the rest of Mundane Adults on Rob’s Facebook page.

SHAREAlthough June has been a tough month for the world, Pride still managed...

SHARECandles are a form of self-care for many people. Sometimes this method calls...

Imagine how tired students are