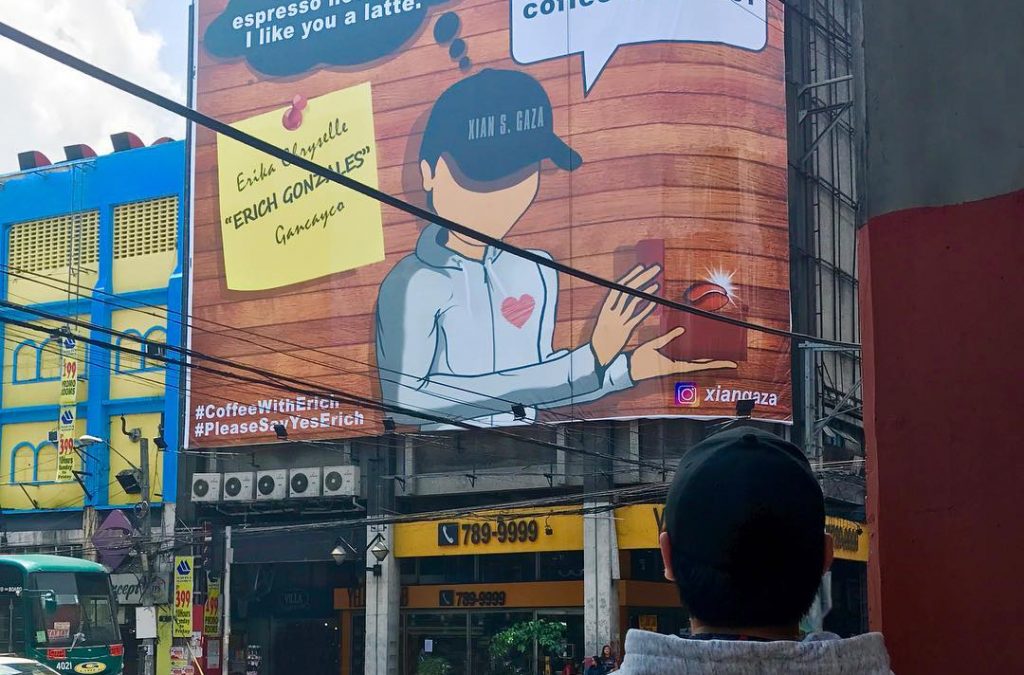 When Xian Gaza, alleged CEO of Hong Kong-based Guanxiqian, decided to ask actress Erich Gonzales out, he decided that the best way to win her heart was to make a billboard of him asking her out for coffee. “I can’t even espresso how much I like you a latte. Will you. . .drink coffee with me,” reads the board. While the puns are forced, you can’t deny this guy’s bravery. And he has the money to back it up.

Erich Gonzales, As much as I want to send this heartfelt message to you privately, which I have been trying and doing so for the past month, I really can’t find a way. For this, please accept my sincerest apology in advance for doing this publicly with an ardent hope that this shall reach you at the soonest possible time. To start, let me indulge in a brief moment of remembering. Last January 5, I was so down and demotivated with life while nursing a broken heart. So I have decided to take a much-needed walk towards SM Aura’s chapel, crying while praying, desperately asking for some Divine strength and guidance then went down and decided to book a flight to Hong Kong immediately the next day to unwind and breathe some air. Afterwards, I jumped off to Uptown Mall Cinema to watch the last full show of “Assassin’s Creed” and much to my surprise you were seated right there in front of me along with some other four. After the movie, I mustered all courage I had up my sleeve in order to approach you and took this very selfie so that I may remember that magical moment. You, being kind, happily obliged. At that moment, you had left a massive imprint on my heart. You left me mesmerized. I don’t wanna portray sainthood nor pretend to be one in your eyes. Yes, I’m a typical bachelor who tries to meet and mingle with some girls but there are two factors why nothing shall really work out that time. First, I’m on my ‘moving on’ stage and second is without your knowledge, you really touched a portion of my heart that even myself can’t describe nor put it into words. Half of 2017 had passed now and I made 29 flights to numerous locations taking that “Uptown Mall Cinema Moment” with me, and so with you who never left my mind.

Xian also posted on Instagram about how he’s been trying to send a “heartfelt message” privately but “really can’t find a way.” So, he decides to write a public message where he basically mentions that he was motivated to do this “after seeing her in a movie cinema and taking a picture with her.”

His Facebook post also says, “If you will judge me for that, you have all the rights in the world to throw stones at me. I would rather be hated for who I really am rather than be loved for who I am not. All I want is to be genuinely happy in life and Erich Gonzales [sic] is what my heart truly desires.”

Some netizens actually say Erich is obliged to go out with him, one going as far as to say she’s a “very mean” person if she doesn’t do so. We can assume they don’t want their feelings of “kilig” to be disrupted.

But this is just sad. Nobody should be put on the spot and threatened like this. She never asked for it. What would Erich be feeling right now? How would anyone feel when they’re put on the spot? The whole thing is emotional blackmail. Besides, dating becoming the “nice thing to do” just because someone is giving you gifts doesn’t intuitively sound like the most “kilig” thing.

This is all part of the toxic mindset of “nice” acts made by “nice guys,” whose pursuit of something extravagant or spectacular gives them the heightened expectation of something in return, which in this case is a date. By using the billboard, Xian is including the public in the proposal, and making the proposal a spectacle, adding more pressure on Erich. Here’s how the Internet is reacting: 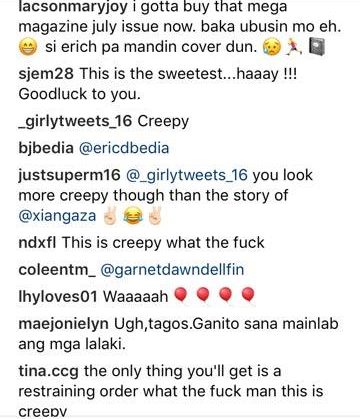 Do we really need to celebrate these grandiose public displays of desire? The people who are responding positively are missing out on what Erich would feel. Thankfully, other commentators have more sensible things to say.

Public proposal via billboard: not cool. And creepy. And manipulative. Stop romanticizing this.

SHAREBy Celene Sakurako If you listen to artists the likes of Calix, Den Sy...

Congratulations! After years living in a room with kid posters and bright colored...