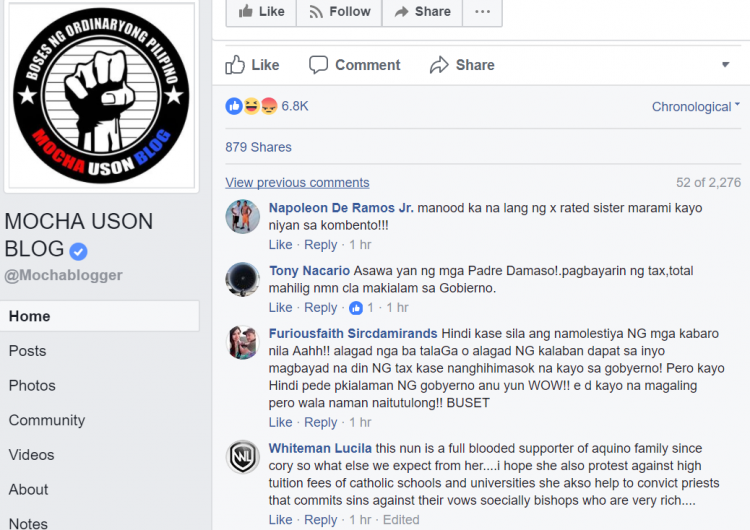 One thing’s for sure. Sexy pop singer turned political blogger Mocha Uson has a lot of supporters. Since being appointed as Presidential Communications Operations Office (PCOO) to President Rodrigo Duterte earlier this year in May, she’s drawn a wide range of controversies for her posts on both her verified “personal” Twitter and Facebook accounts—where she clarifies in her description that she’s “not a journalist; just an ordinary Filipino,” along with the disclaimer that “the opinions expressed [on her blog] represent [her] own views and not of the PCOO.” Regardless of whether her blogs reflect the views of the PCOO or not, her posts have put her under a lot of scrutiny, as her job as the PCOO is to help relay the government’s progress and message to the media.

Scroll down her Facebook page “MOCHA USON BLOG,” and you’ll see that her posts attract over hundreds and thousands of comments per post. Many of which are obscenities and comments telling her to resign from her job—which by the way pays her at least P106,454 per month excluding allowances and bonuses. By looking at these, it can be concluded that Mocha is popularly disliked, or moreso, Mocha has a lot of online haters. But does she really?

We found an experiment conducted by Indigo Research that challenged this. They used a text generating program to implement a relatively new technique that uses the Long Short-Term Memory (LSTM) network. LSTMs, unlike more popularized text generation techniques like Recurrent Neutral Network (RNN), can generate text imitating the style of a writer by using “memories” taken from already learned experiences. Thus, producing texts that copy the style of a given writer. In this case, the style of a Mocha Uson hater.

The text experiment took over 1.5 million Facebook comments scraped from the “MOCHA USON BLOG” starting from Jan.1 to Sept. 14, 2017 and fed it to an LSTM to generate Facebook comments of the same style. And, well, the results were uncanny.

Out of the 15 presented above, only five (#2, #10, #11, #12, and #15) are actual real comments posted on Mocha Uson’s Facebook. By looking at these, one could say that the text generated comments are indistinguishable from the real comments. Begging us to think, are Mocha Uson’s online supporters even real?

SHAREIf you live under a tightly shut rock situated in the middle of...

SHAREIt’s a given that people don’t always say what they mean. Saying something...