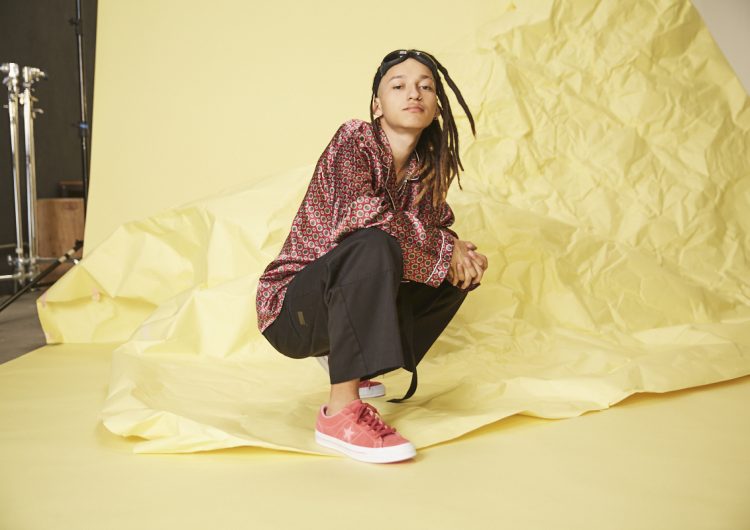 NFX has all the qualities of a young man who’s been successful shooting his shot: he carries himself with a confident swagger yet humbles himself when he gets to share a little bit of his mind once you talk to him. Energetic, optimistic, and also friendly and courteous, I met NFX at the recent Converse One Star Hotel in London, and one night our group—a ragtag gang of editors and influencers from different countries—found ourselves enjoying a little after party in one of our hotel rooms.

We began playing music from our home countries via Youtube videos playing in the TV monitors and one thing was clear: there’s music—beautiful, gut-wrenching music—beyond what we see in our own social media feeds. What happened that night was a cultural exchange and possibly the best we could have communicated our countries’ backgrounds.

Hip hop with its leanings to portray a less-“aestheticized” version of storytelling, was what NFX and Max from Pousta shared to the group. In it, hard-hitting boom bap beats with multi-syllable rhymes and smooth hooks, with the language similar to our own country’s languages, hitting hard like a drum. Despite the differences in culture we found similarities through music. Shit was tight, man.

In an exclusive interview with the young gun from Chile, NFX shares a little bit about himself, his home country, and the music they bump to:

How did you come up with the name “NFX”?

The name came up after a song that was called “It was not strange”, which I never launched, but when shorten it, it came up as NFX. When I was looking for a name I stayed with that one, because before that I just used my regular name.

“For me, my music is something pure, I care about maintaining my style but always varying its execution.”

For me, my music is something pure, I care about maintaining my style but always varying its execution. I take care that the sound sounds in a specific way that I like it and I am comfortable with, I try that my rap sounds as the one of the Golden era and the Latino flow. What I try to do with hip hop is to use rapping in any type of beat.

What’s your favorite music video of yours?

My favorite video is “Blah blablaaaah”, because aside of being a song that I like a lot, it was the first video in which we were very careful to deliver something that really had high quality.

Hip Hop from Chile is very well known in Latin America. The message, the style and the flow from hip-hoppers are very high level. In Chile, hip hop arrived a long time ago and the oldest rappers continue to maintain their flow and they are always renewing. Now with the new generation of rappers we will see the results of all that has been done here in Chile in regarding with rhythm.

“In Chile, hip hop arrived a long time ago and the oldest rappers continue to maintain their flow and they are always renewing.”

Who are your other favorite Chilean artists? People you respect?

In a personal level there are many rappers and very good groups, but the ones that I respect the most are Movimiento Original, Mente Sabia cru, Liricistas, The Panic Room, Ana tijoux, chyste mc, and many others. I also like Teorema, drefquila, Young cister, pyblochille that are from a new generation and they are really powerful.

How would you define success in what you do?

I think it is just because I put a lot of effort, when I had to rap I did it without a doubt, even if I was tired, or I had to travel a lot of miles or I did not feel like it. I did it anyways because I wanted to give everything until I achieved something. When everything started to go in the right way I didn’t thought I could had this success but now I realize that there are no limits to achieve everything you want, as far as you decide it for yourself.

What’s your message for anyone who aspires to be a successful artist like you?

I will tell them that they should always give the 100%, not just stay with what you already did, always go beyond the limits, and when you achieve your goal, go for another, dedicate and give it time. Nobody was born being the best even the wiser had to learn. I hope that everyone that wants this can achieve it!

Catch Waiian, SHNTI, and more of your faves in this free online concert

SHAREThe Simon-verse is still going on full force with the spinoff “Love, Victor,”...