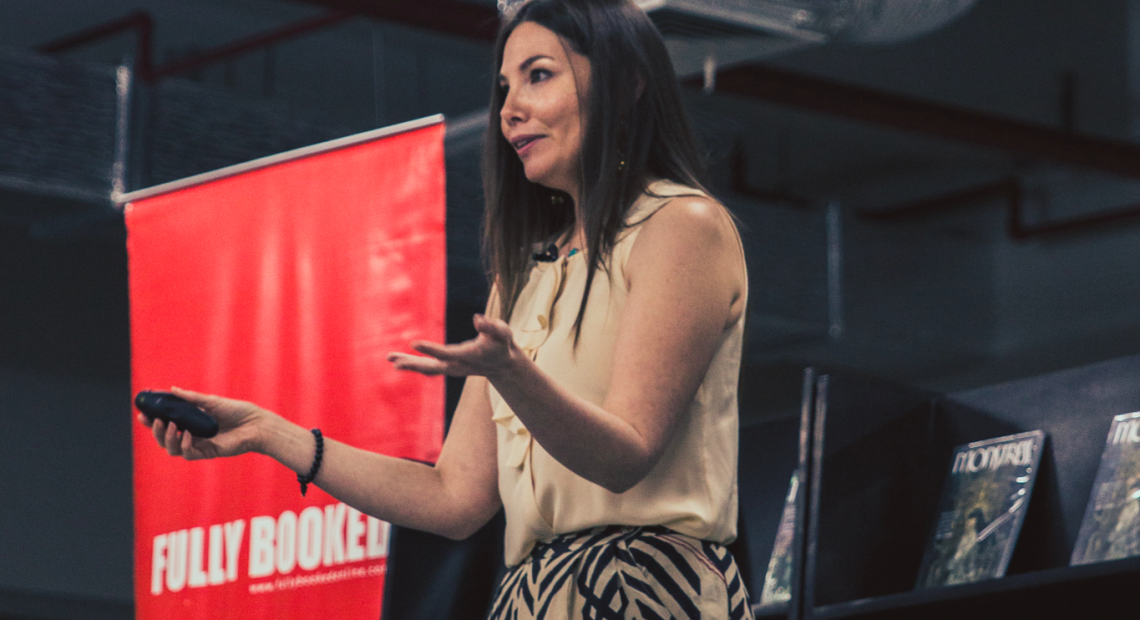 “Things are beginning to change. I see more women, people from the LGBTQ+ community, and people of color creating comics and graphic novels. We need writers and artists exploding into this field, we need actual structural change. If DC and Marvel don’t change, they will die,” author/comic book writer Marjorie Liu says during the first day of her sci-fi graphic novel Monstress’ book signing tour. 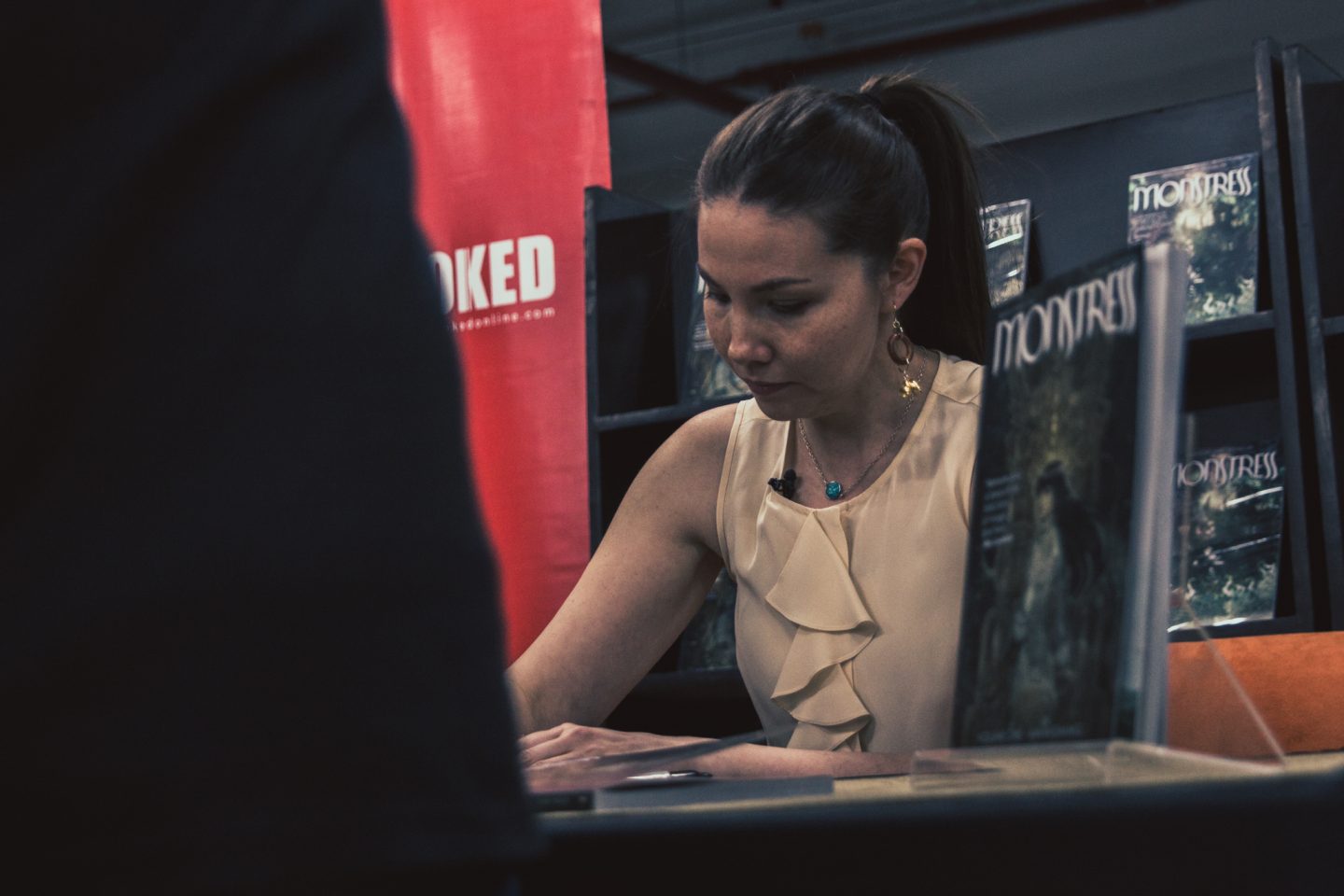 This Chinese-American writer does a lot of things: She’s a former comic book writer for Marvel, a former lawyer who job-hopped for her passion to write, and the first woman who ever won the Eisner Award last year. She’s a force to be reckoned with in the comic book industry. And for young nerdy women like me, she’s what I aspire to be someday.

“We need diverse writers and artists exploding into this field, we need actual structural change. If Marvel and DC don’t change, they will die.”

Growing up, I saw the comic book industry as a boys’ club. The boys’ club that I desperately wanted to understand and get into. Like any other kid, I was enamored with the super-powered heroes of X-Men and the broody millionaire that is Batman. 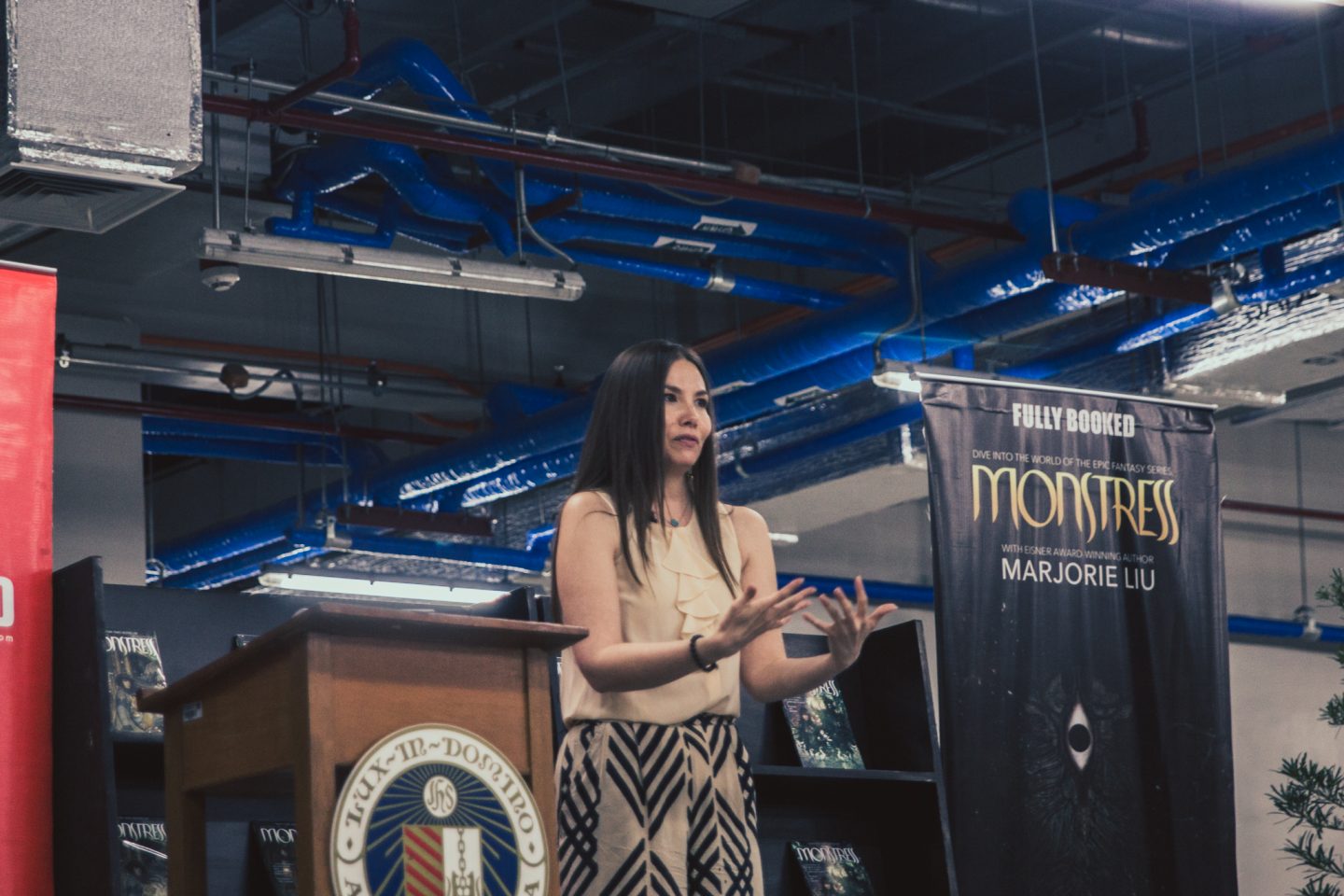 When older people learn that I’m into comics, they would often say “Kababae ‘mong tao, nag-cocomics ka.” It’s disheartening for a little girl to hear, but life with prejudices is like that. So when I attended Marjorie’s talk, it seems she achieved the impossible dream women like me had when we were younger. She managed to break into that boys’ club and lived to tell the tale.

“[Writing] is beautiful, it’s magical, but it won’t solve all your problems. I was not prepared for the loneliness, self-doubt, and anxiety.”

In her book signing tour, she conducted a masterclass on comic book writing and how to construct a good narrative. But her talk also went beyond her writing when brought up her struggles as a young writer. She tackled the struggles burning out, being discouraged due to the double standard bullshit of the industry and drastically changing careers for the sake of passion.

Here are the seven things I picked up from the Eisner Awardee/New York Times’ bestseller double threat on how we can shatter glass ceilings, champion diversity, and emotionally prepare ourselves to take a leap to do what we love. 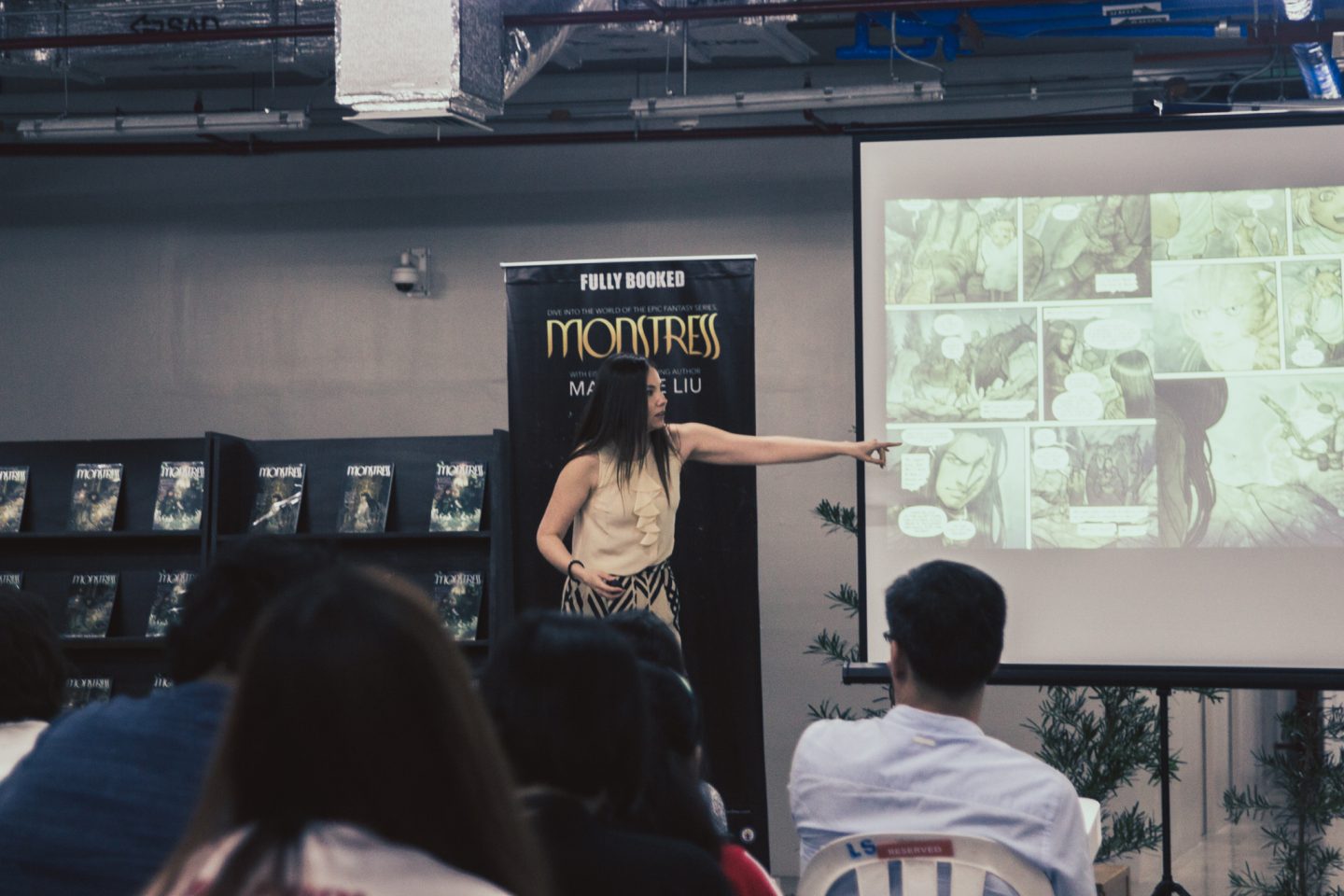 Want to get published someday? Then keep writing

“You’ve got to finish what you have started. So many people haven’t finished what they’ve started. If you don’t finish what you have started, you won’t get published,” Marjorie advises an aspiring creator when he asked about dealing with creative burnouts. Running out of fuel and being drained in every sense of the word is part of the creative process. But the only way to deal with burnouts is to step back and remind ourselves: why are we creating in the first place?

“Step back and get into the sense of creation. This is a safe space where I can be passionate about what I love. Make it for you, the rest of the world can just fade away,” she shares what calms her down during burnouts. It all boils down on reminding ourselves why we do what we do. And if stepping away from our pen or keyboards is the way to go, then so be it. Just don’t beat yourself up when that typing cursor is blinking and you’re churning out nothing.

“If you don’t finish what you have started, you won’t get published.”

Following your passion is amazing, but painful all the same

“The idea of being a published writer is more fantastical than Game of Thrones. It’s just impossible. My family didn’t understand why I do this. It is insane to be a writer. If you want to be an artist, the passion required is intense,” Marjorie says.

“The reality of [following your passion] is fantastic, but it’s also painful.”

For those who aren’t in the know, this comic book writer used to be a licensed lawyer before she went into her current industry. She shares how she hid her passion for writing to her family. When her first romance novel got published, that was the only time she told her parents that she’s leaving law to pursue writing for good.

It’s good to follow our passion, but it’s also wise to somehow prepare ourselves for the heartbreak it can lead us to. It’s not a rose-tinted path after all. “[Writing] is beautiful, it’s magical, but it won’t solve all your problems. I was not prepared for the loneliness, self-doubt, and anxiety. But it’s real. The reality of it is fantastic, but it’s also painful. Don’t punish yourself that you’re not writing fast enough. Don’t isolate yourself in the process.

“It’s super important to read as much as you can. It helps you get the rhythm of the narrative. It gets internalized to the point that you don’t have to think about it anymore,” Marjorie urges the attendees of her book launch to be voracious readers. Back when she was starting out as a writer, she started as a romance novelist with her first book Tiger Eye. It’s a paranormal romance novel set in China and America. She only got into comic book writing back in the early 2000s when her agent suggested that she’ll be a good fit for Marvel.

During her talk on comic book writing, she mentioned how novel writing and comic book writing is different. “Comics are like film. In a novel, you know how you have described everything. But in comics, you hide surprises with visuals. You have to think of the placement of your reveal. You can’t hide the best stuff at the end—put it in front,” she advises future comic book writers and artists present during her launch. This is why versatility in your reading list can do wonders in your writing as well. 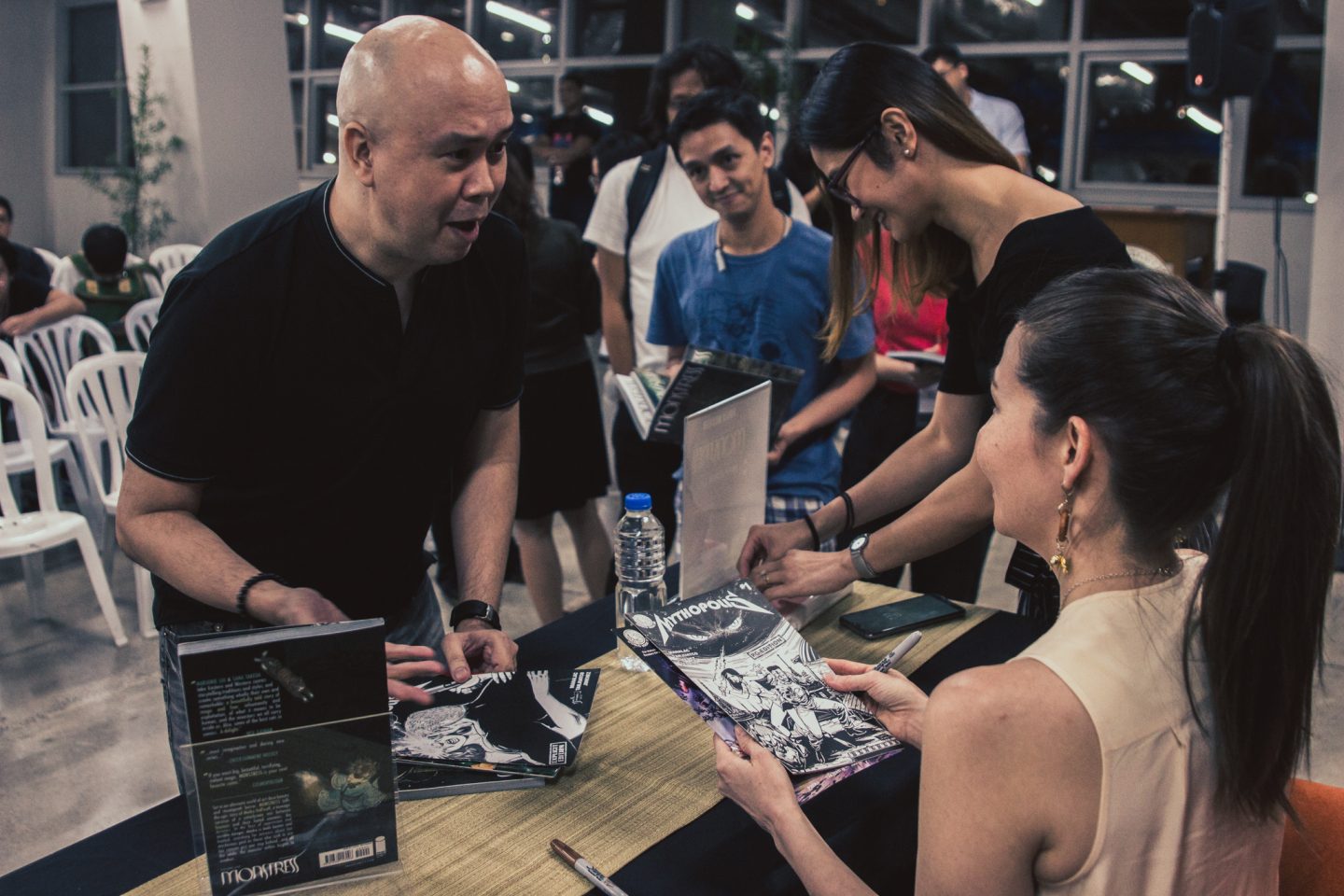 Good characters are made of complex problems

What makes a great character? This question echoed on people’s minds during her masterclass. People say dimensions, while some others say complexities. Marjorie agreed that these are all good answers. And here’s why: “Think of the characters as people who were fully immersed into their world. They have problems, conflicts, and lives before the comic started. A good character is already birth in conflict in your story.”

“Things are beginning to change. I see more women, people from the LGBTQ+ community, and people of color creating comics and graphic novels. We need diverse writers and artists exploding into this field, we need actual structural change. If Marvel and DC don’t change, they will die,” Marjorie pleads her call to action during a Q&A.

“Don’t listen to the bullshit. There’s always a way in. All you need to do is keep doing your work.”

Publications like Marvel and DC have been easing in into representation lately. Marvel NOW has more superheroes of color like Kamala Khan aka Miss Marvel, while the GLSEN Visionary Award for LGBTQ+ representation was awarded to DC two years ago. But what about the writers and artists behind these characters?

When she started out as a writer in Marvel, she claims that there were no women of color in the writer’s room. Marvel’s executive around that time reasoned out that “girls don’t read comic books,” which is a huge lie altogether. This makes the presence of writers like her in the workroom important. “Don’t listen to the bullshit. There’s always a way in. All you need to do is keep doing your work,” she advises aspiring young writers and artists upon entering the industry.

SHAREWe suppose it was only logical. If Power Rangers is getting a reboot movie this...

SHAREIt’s not rocket science to know that acceptance of the trans community still...