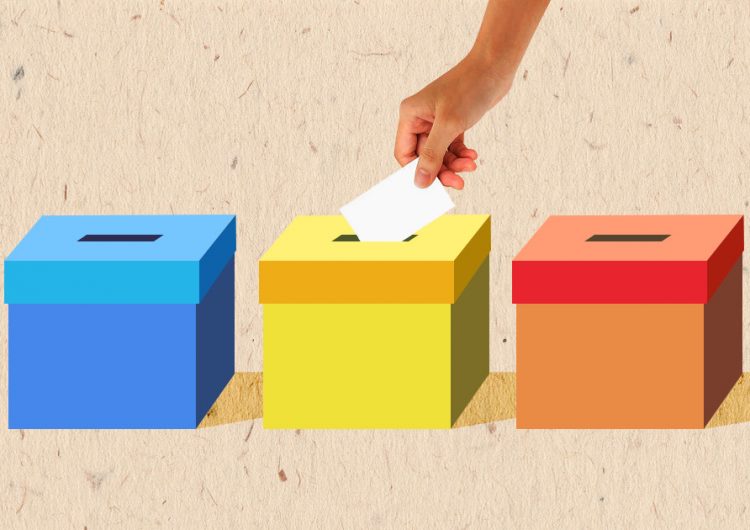 It’s T minus two days until elections day! Work is suspended and school is out for the occasion, but are you voting?

Sound off! Wyd on Monday?

Survey says mostly yes, and that’s great news! Registration-wise, this year was an improvement with 2.5 million new registrations instead of the COMELEC’s projection of 1.5 to two million. That’s our kind of trend, and we’d like to keep it up.

Of course, there’s still the minority that hasn’t registered or isn’t going to vote. That’s still a chunk of votes lost, and every vote matters. We talk to some young people to find out why they are or aren’t voting for some insight on what works and what needs to be improved for a better voters turnout.

The views and opinions expressed in this article are those of the interviewees and do not necessarily reflect the views or  opinions of our publication.

Are you voting?
Yes!

Why?
Because I don’t want the vermin of the earth elected into Congress. We’ve seen what happens when we elect officials undeserving to represent the Filipino people, and we can’t repeat the same mistakes. Plus, I’ve seen what the polls say and it scares me shitless. I refuse to be complacent and let the likes of Bong Revilla and Imee freaking Marcos run the country when all they’ve ever proven is that they’ll prioritize their personal interests over the nation’s. (Shoutout to Bong and his plundered P124.5 million)

“That we elect candidates who have the best interests of the country in mind and will put accountability and inclusive development at the top of their to-do list.”

What outcome are you hoping for?
That we elect candidates who have the best interests of the country in mind and will put accountability and inclusive development at the top of their to-do list. I feel like the last three years have been so terrible because impunity has become so normalized that the people have lost hope. But then there are candidates like Chel Diokno who remind us that there’s still something worth fighting for and one way to fight is to vote.

Are you voting?
I am not.

Why?
I’m not a registered voter yet. As someone who takes residence in three different (and distant) places, I’m still unsure where to register as a voter.

What outcome are you hoping for?
I actually hope that certain members of the popular Otso Diretso slate don’t get voted in because not every member of that slate has a particularly “exemplary” record (*cough* Mar Roxas *cough*). But most of all, I hope at the very least Colmenares and Diokno get voted in!

“I feel like as a young corporate slave trying to get by on a job with almost zero social relevance, it’s the least I can do to make a difference in this country.”

Why?
I feel like as a young corporate slave trying to get by on a job with almost zero social relevance, it’s the least I can do to make a difference in this country. A lot of my officemates aren’t voting even if they know the likes of Bong Go, Bato, Revilla, will run this country into the ground. It’s complacency like that that gets those kinds of politicians into power.

What outcome are you hoping for?
I’m really hoping for the best here and I hope pro-masses candidates like Diokno, Gutoc, and Colmenares win. Their platforms are in line with the future I hope our country attains.

“Even though recent polls/surveys are disappointing, I’m still clinging on to a thin thread of hope.”

Are you voting?
Unfortunately not.

Why not?
I wasn’t able to register. It took so long to process my requirements that by the time I got them, registration was over. I wish I did, though. Especially now that we can see clearer through the lens of social media—all the manufactured lies, the stances of local celebrities and how huge their influence is, the avid followers who only look back at past mistakes and not at the current ones, and downright trash talking here and there. My eagerness is so, so strong, but most times I feel really helpless. Now instead, I share my views both online and with people I know. I avoid stooping low and throwing around mere blunt criticism. It’s the least I can do.

What outcome are you hoping for?
Even though recent polls/surveys are disappointing, I’m still clinging on to a thin thread of hope. I do wish that candidates stop trash talking other fellow candidates. The more hate they exhibit, the more that the masses will misunderstand their respective platforms. But since ‘trends’ spread like wildfire nowadays, I really pray that every single candidate does the same for the greater good.

Yes, I am voting on Monday.

” It is in voting that we can express the change that we want for the community and for this nation.”

Even though I work here in Manila and I am registered in our province which is a day’s worth of travel by Roro, I firmly believe that I should exercise my right to vote. This is one of those opportunities where we can voice out what kind of leadership we want and the kind of government Filipinos deserve. We should elect officials, leaders, and legislators who can address issues that are important to us. It is in voting that we can express the change that we want for the community and for this nation.

What outcome are you hoping for?
I would really want to see the people who deserve it, those who have pure intentions to lead this country to progress, take a seat in the government. I want to see public servants and not traditional politicians to win this election. We should know by now what the Filipinos truly need and deserve. But if ever the candidates that we voted for do not win this election, we should remember that their names were heard, that their platform and beliefs have been addressed to the people, and that we Filipinos still have a choice.

Why?
I was not able to register on time. Even when the registration was extended, I simply was not able to meet the dates. I currently feel numb about the situation. We are experiencing a very surreal reality where voters are either privileged enough to be educated about the rightful people to vote and not vote, while those not privileged enough are still being fed by idols and actors-turned-politicians.

“I want to say I’m hopeful, but the reality is that the ‘woke’ voters are not really in the leading figures of voters.”

What outcome are you hoping for?
I want to say I’m hopeful, but the reality is that the ‘woke’ voters are not really in the leading figures of voters. All I am hoping for is a miracle to keep the unwanted politicians unwanted, and for my mans Colminares, Gutoc, Diokno, and the rest of the candidates for the masses to win.

“By voting, I could also say that I fought for real change, no matter the outcome.”

Are you voting?
Yes.

Why?
Aside from it being my right, voting is an opportunity to do something that could possibly benefit the country now and for years to come, and I wouldn’t wanna pass that up. By voting, I could also say that I fought for real change, no matter the outcome.

“No matter what happens, I hope the outcome would be in favor of us, the people, rather than the benefit of egotistical politicians.”

Are you voting?
No. Shame on me.

Why?
I wasn’t able to register on time. I was living in my college town during the registration period, which also coincided with my graduating semester. I was living far away from my voting district and I was unable to find time to register. I really, really wish that I tried harder to make time for it though.

Read more: This quiz helps you pick 12 senators who share your stand

What outcome are you hoping for?
I hope that the people who are aware of the corruption in government go out and vote. I know many people who know what’s really up with the country’s politicians, but they’ve just given up at this point. I can’t blame them; the state of our government is abysmal. Add to that the rampant vote-buying that’s happening everywhere. But we can’t give up. Not trying will do nothing but seal our shitty fate.

*Names are concealed by request

SHAREFashion is not the first thing that comes to mind during this pandemic....

SHARESeriously, how much have we been lifting the #SupportFilipinoFilms battlecry? Supposedly airing on...