One night in March 1982, in a single dimension in this infinite multiverse, The Ravelos’ own world was about to take a turn.

The Ravelos’ original lineup consists of the brawny Kapitan Barbel on drums, the immortal Last Stick Man on bass, and Teeny Tony, who was later kicked out for his lack of punk cred. Darnuh Vergara filled up the spot for vocals and lead guitar, with super strength and flight in the rest of her arsenal. Flash Bombas entered the scene as their shockwave and demon-summoning roadie, but his knack for songwriting and guitar-shredding later promoted him to center stage. Life was like clockwork for The Ravelos: They fought monsters on the side and dominated shows by night.

It all changed during a gig at Jewel’s, when they were unknowingly pulled into a time portal that transported them into this dimension. For The Ravelos, the world as we know it is strikingly different from theirs. Compared to their home universe, Manila ’19 is a lackluster dystopia. It has all the oppressive horror of “The Terminator,” but with less Arnold Schwarzenegger cyborgs and more smartphones at gigs.

Read more: The Ravelos is the new #SigawDarna concept punk band calling out the government

With such a drastic change in environment, they’re slowly getting by, but not without their ethos fused in whatever they do. Their released tracks can all be streamed online; yet, their music recalls an era of radical songs played through a Walkman, of being caught in between a cultural and political revolution. It’s a taste of The Ravelos’ dimension-hopping situation and a testament of their skill as a band, when their listeners are transported through time themselves. This could also be one of their hidden mind-controlling powers at work, but whatever it is, it’s effective.

Once they score a time machine from their friendly neighborhood mad scientist, The Ravelos will head back home. In the meantime, they’re serving today’s crowds with a taste of otherworldly, old-fashioned punk. 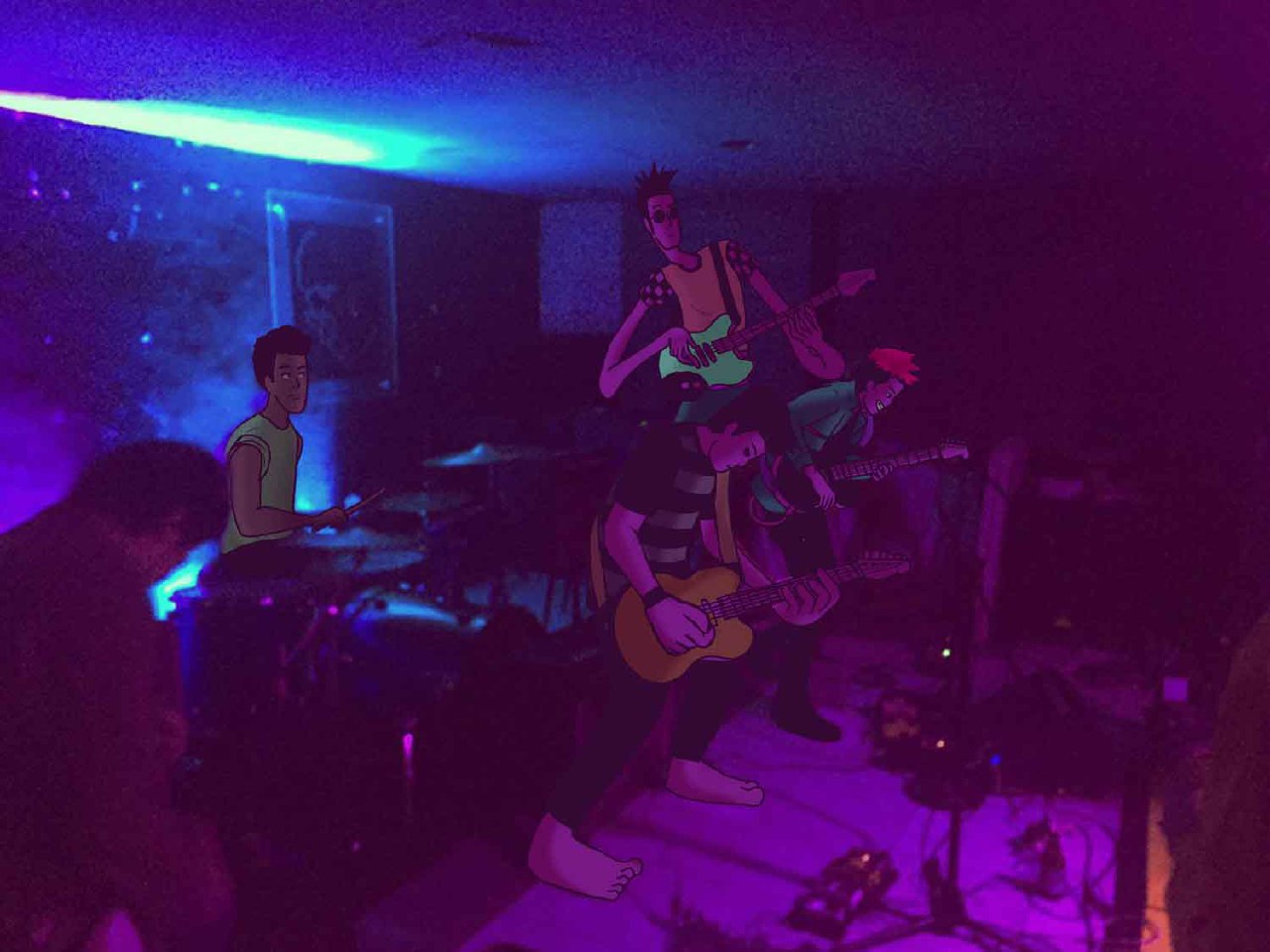 So far, how’s this timeline treating you guys? Despite this dystopia, would there be a part that you’d miss?

Flash Bombas: I wouldn’t miss much. I miss the way things were and can’t wait to go back. I hate it here, honestly. The fascist government, the wanton disregard for human life, the rapid deterioration of the environment, and all the ads. It’s hell.

Deeng: What Flash is trying to say is, uh—when the time vortex phenomenon displaced us in your timezone, we didn’t know what happened at first. We thought we died and went to hell. Now, we know that this is all real.

Kapitan Barbel: We’re getting used to it, and what’s been helping is your internet. Oh man, I’d definitely miss your smartphones. I know that when we go back in time, we would get these in 30 years. I might be dead by then. I’d also miss the milk tea you guys got.

You gotta pick your battles talaga. It’s important to protect who you can, but you can’t do much if you get too hurt.

Last Stick Man: Back in the day, what we would do is we all just go to work and gig at night with superheroics in between. But I have to tell you, freelance superheroing doesn’t really pay as much as you would think. And so I would work as an office worker by day, fight a supercriminal, and try to make it to a gig by night.

I just want to be in a band, but I’ve been gifted by these powers from a radioactive box of cigarettes. If I see that I can help, I will. But, I’m also an artist, you know? When I got here, I’d been living off YouTube. I get a lot of Patreon backers from around the world who ask me to morph in different stunt videos. It’s a living.

Flash Bombas: I did superheroing full time, since it pays the bills. Often times, companies can put you on a retainer or you’re hired for one time gigs. That’s how I got into the Ravelos where I was their roadie and bodyguard. But then, I started writing songs and showed it to them, and now I’m part of the band.

How different are today’s crowds from your home ’verse?

Last Stick Man: What I like about the future is what the music scene has grown into, man. Back in our day, no one was interested in going to bars to listen to combos play their stuff, they wanted covers. You had the bars that catered to Manila Sound, disco, sentimental love songs by love teams, and pop music from child stars. It was what was allowed and deemed radio-friendly by the government.

Flash Bombas: Also, not a lot of you have superpowers anymore. It’s interesting how that has faded into obscurity. We only see a few witchcraft practitioners and body modifications here and there, but nothing too extraordinary. Where have all the heroes gone? And villains?

Darnuh: We used to have to fight supervillains who would plan to attack us while we were at a gig. So, it’s a nice change that we don’t end up destroying the venues we play music in.

Deeng: I used to have such a hard time booking events for the band because of the added risk factor, but then we got more bookings when news coverage came about, and people saw that as part of the appeal of our shows. I don’t encourage thrill-seeking since the band is about the music. Although, it’s good that we earned some fans because of the curiosity. 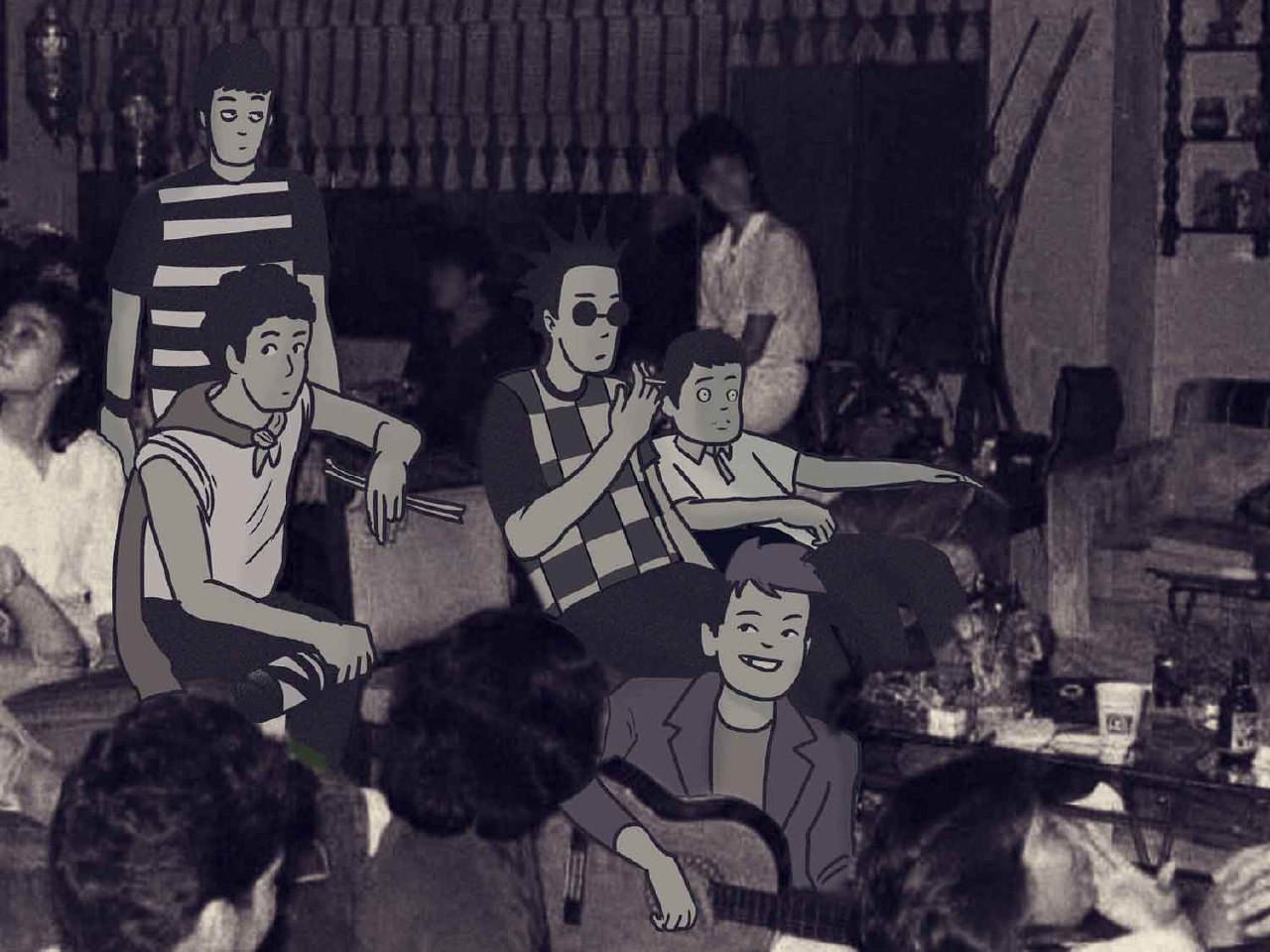 Do you think that fictional superheroes here are accurate representations? How do they compare to the real deal back home?

Flash Bombas: I noticed that a lot of ’em are too nice and noble. And handsome. There’s no way that they should all be that good-looking and ethical. It’s suspicious.

Kapitan Barbel: I think Batman’s awesome. Amazing what you can do when you’re super rich. But yeah, I don’t think that anyone with that much money could ever be a good guy knowing what we know. It’s definitely just a power fantasy. Most of the supervillains back home are these super rich assholes, while the superheroes we know barely get paid for the work they do.

Last Stick Man: I just wanna know where they get their costumes and how much they cost, honestly. They have really nice costumes. I just go out and fight crime with whatever’s clean still.

[On the best track they’ve released] “Anuna.” We wrote this back before the time travel about our frustrations living with a corrupt government and the systematic abuse of its people. It’s sad that it applies to the 2019 situation.

If you could trade places with another member of the band, who would it be?

Last Stick Man: I mean, I could do that already.

[At this point of the interview, Last Stick Man uses his shape-shifting powers to imitate the likenesses and voices of everyone in the group. Everyone else finds this disgusting and tells him, “Stop, please stop doing that, we’ve told you before, please never do that.”]

What do you think is the best track you’ve released?

Last Stick Man: “Anuna.” We wrote this back before the time travel about our frustrations living with a corrupt government and the systematic abuse of its people. It’s sad that it applies to the 2019 situation.

Darnuh: I like the new songs we’ve been making since we got here. We’ve been inspired by the new music and experiences we’ve had, so it’s definitely influenced our music. 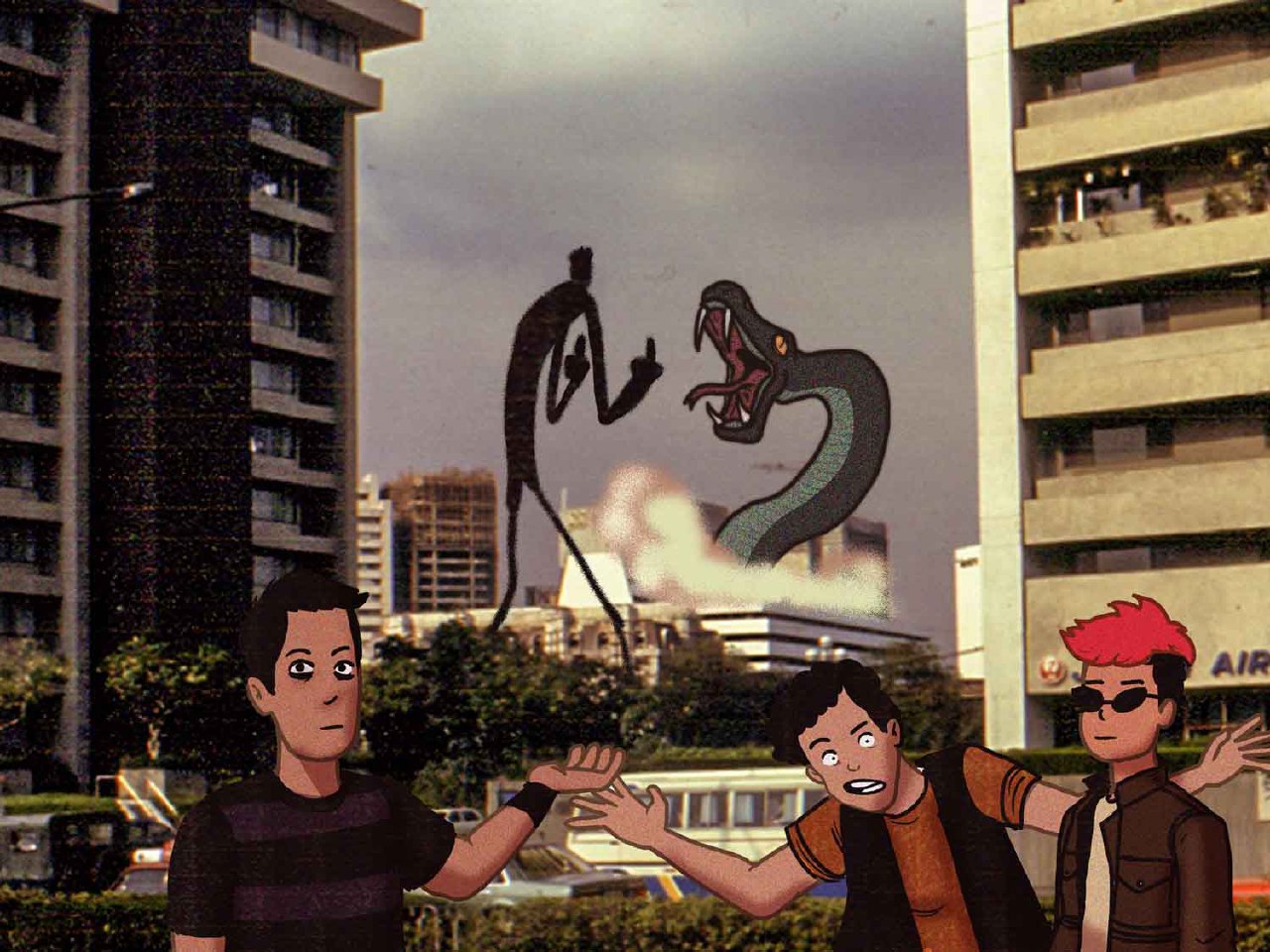 Flash Bombas: Know your limits. Sometimes, when you try and fight a bad guy, the bad guy might be out of your league. You gotta pick your battles talaga. It’s important to protect who you can, but you can’t do much if you get too hurt. So, I think it’s best if you can get a sense of when someone is too much for you.

Last Stick Man: Have a roadie watch over your things while you fight crime, and support each other however you can. My archrival and evil twin from a different dimension, WalastikMan, once showed up at a gig to challenge me during our set. He demanded a one-on-one fight, so the band just played fight music while we fought. That was good support.

This story was originally published in our fifth anniversary issue and has been edited for web. The digital copy of Scout’s 36th issue can be accessed here.

SHAREThe UAAP board just announced few major changes for this year’s season. Though...