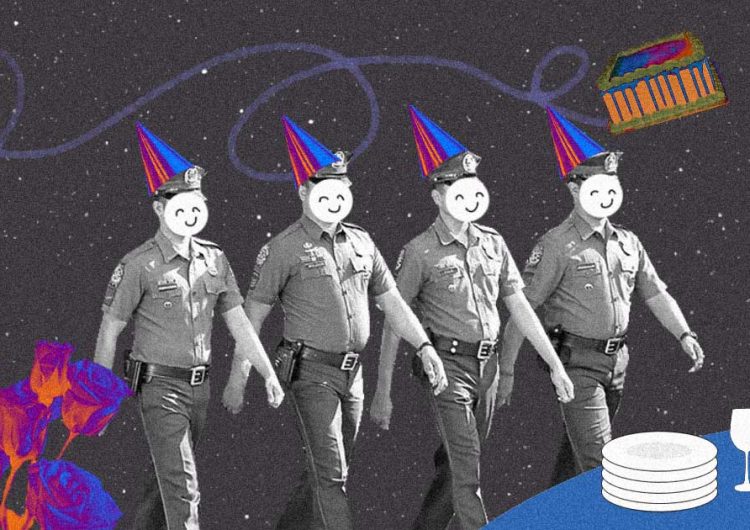 Since quarantine began, we’ve been doing our best to go by the rule book: Head out only for basic needs, emergencies or essential work. Follow the schedule on your ECQ pass religiously. Follow the curfew. Wear a face mask at all times. Ensure social distancing—which also means calling off any form of mass gathering.

After all, quarantine violators will immediately be arrested without warning, said the Philippine National Police (PNP) last month. But surprise, surprise: These lockdown watchmen recently held a birthday party for their top cop—and no, not through Zoom or Animal Crossing. Did they just leave the social distancing protocol in the dump? Because this sounds like something off Top 10 Anime Betrayals.

Which ones? These are official photos shared by the NCRPO. And the chief is wearing the same shirt. https://t.co/FCfIMku2Hb pic.twitter.com/VYMZ6TPYsg

On May 8, photos showing folks from the PNP throwing an early birthday bash for NCRPO chief Debold Sinas were posted on the NCRPO Public Information Office’s Facebook page. Although these photos have already been deleted, media outlets were quick to get receipts: People gathering around the venue, lining up for the buffet, sharing tables and meals; and of course Sinas—the birthday boy—mingling with his guests. People have also been questioning if the gathering was held within curfew hours and if it falls under “essential travel.” Last March, Sinas himself said that those who resist ECQ guidelines will be put behind bars.

On Apr. 6, a 58-year-old man in Iloilo was arrested for allegedly going out without an ECQ pass and a face mask. The Inter-Agency Task Force (IATF) previously announced that wearing a face mask in public is mandatory. In Sinas’ birthday serenade, some attended maskless. Cue a ranking police general’s text, when asked about their reaction about the event: “Hehe na lang muna.”

Metro Manila police chief Major Gen. Debold Sinas issued the apology as he claimed some photos of the occasion that circulated on social media were “edited” and “old photos.”

His birthday celebration shares the same energy of certain events during the ECQ period. In March, Mocha Uson gathered OFWs quarantined in Batangas, and defended it as a way to “check up” on these workers to assuage their loneliness.

In the same month, Senator Manny Pacquiao had a “ceremonial turnover” where he donated 200,000 face masks to the PNP, MMDA and AFP frontliners. Meanwhile, Senator Bong Go was seen distributing donations to a large crowd in Butuan City. Social distancing wasn’t followed in these events, and—as a cherry on top—they went through with photo-ops.

Ever since ABS-CBN was forced to shut down, the Latin phrase “dura lex sed lex” (“it is harsh, but it is the law”) has been thrown around, as if our law really operates justly. Even during quarantine, we witnessed how the law favors certain people.

While people in power get away with their violations, the working class are seized with no “compassion.” By the way, whatever happened to Koko Pimentel’s case?

Parties are mass gatherings. It is insensitive to hold one. The Supreme Court held a retirement ceremony of a justice with 40 years of service via a private videoconferenced ceremony. He deserves more but we had to do what was ethical while our people suffer#NoBirthdayParties

On Twitter, Supreme Court Associate Justice Marvic Leonen said, “Parties are mass gatherings. It is insensitive to hold one.” If we can’t trust our officials in enforcing their rules even with things as inessential as gatherings, how can we trust them when it comes to more serious matters? At the end of the day, almost two million families are expecting to recieve cash aid from the government. At the end of the day, selective justice is still injustice.

SHAREWith the coherent color-stripped aesthetic, UNIQUE is undeniably making a brand for himself....