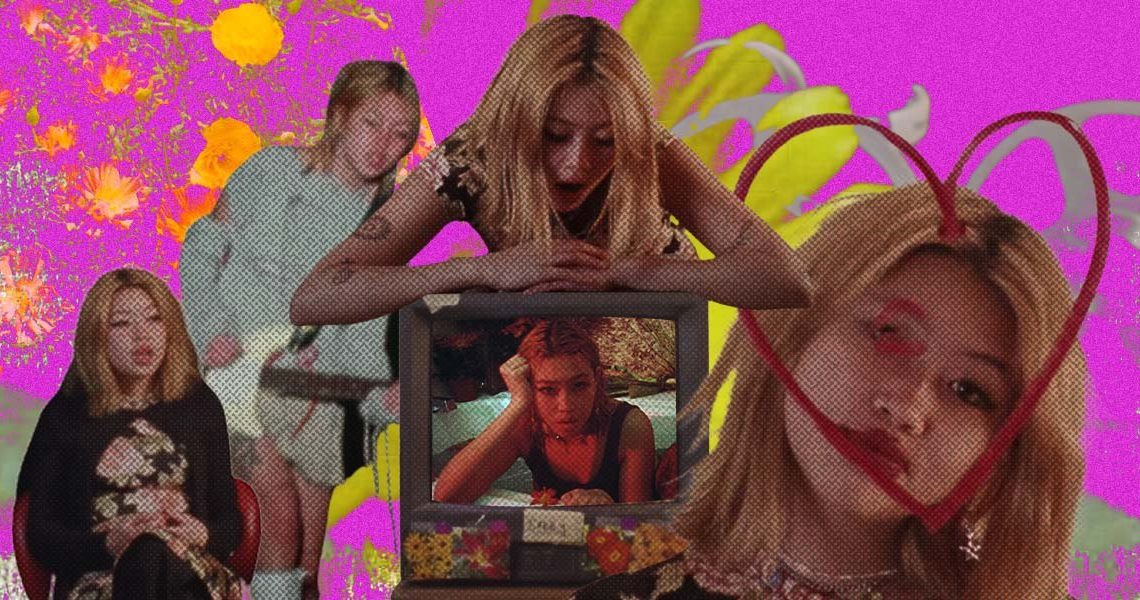 It’s crazy knowing that every banger Beabadoobee is releasing was created in her bedroom: the “smelliest, messiest space ever,” she says, as she shows off her room via an exclusive Zoom call.

She’s sitting on her bed, doing a live show at literally 10 in the morning. Posters and photos were stuck all over the wall behind her and, for a moment, I thought it’s kind of like I’m in my own room.

That was my first thought when I started listening to Beabadoobee not too long ago: She’s the cool girl with a guitar you meet in a ’90s coming-of-age movie, the band girl you want to be friends with, but she’s also just like you. She’s a girl who’s unafraid to be who she is, riffing that guitar on a good day and wouldn’t think twice smacking you with it if you fuck her up.

With the release of her debut album “Fake It Flowers,” she’s dedicating it to every girl who wants nothing more than to be herself.

“I feel like there’s a lot of internalized misogyny, and we live in a very misogynistic world. I feel like [there are] perceptions of myself as a young Asian woman that I have to act a certain way, that I can’t be loud or annoying or sarcastic and be myself,” she says.

Filipino-born and raised in London, Beabadoobee―Beatrice Laus in real life―identifies strongly with her Asian roots, acknowledging the struggles that young girls and women face every day.

The 12-track record “Fake It Flowers” is reminiscent of Lara Jean’s hat box in “To All The Boys I Loved Before.” It’s a bunch of unsent letters, except there’s a different kind of vulnerability in a “fuck you” kinda way. They’re raw emotions dedicated to specific people in Beabadoobee’s life, and a person could have more than one song—depends how much they “fucked her up.”

You only release a debut album once, and Beabadoobee made sure to give it her all in “Fake It Flowers.” She finished writing and recording most of the tracks before lockdown except for “How Was Your Day?”

A handful of other songs on the album also have their own music video. One of the first tracks to get an MV is “Care,” the angry girl anthem to rock out to and let out overwhelming feelings with.

Usually pretty quick to pen a song, she admitted that “Sorry” was the hardest to write and record. It was a “lyrically draining subject to sing” and took a lot of time and courage to produce. But it was “so worth it” to her, and it’s the song she’s most proud of to include on the record.

She highly recommends you listen to the banger that is “Dye It Red,” though.

Like so many of us, Beabadoobee tried to channel her inner Ramona Flowers, going through multiple hair color phases: She tried burgundy. She tried blue and thought that was going to be that color for her. She dyed it black on a whim once and didn’t like it. Brown was that mature color for her, made her “look like she knew her shit,” before finally dyeing it blonde.

And she did try red herself. Everyone around her said her hair won’t be able to handle it, and in classic Beabadoobee fashion, she said, “Fuck it, I’m gonna dye it red.”

Beabadoobee channels much of that angry girl energy packed in a colorful, friendly aesthetic, and that was the vision for “Fake It Flowers” itself. “’90s nostalgia but like, Juergen Teller vibes. Very real and very raw.”

“Fuck it, I’m gonna make my own core and call it beabadoobeecore.”

In a sea of many “cores,” with a generation of young listeners fascinated with achieving an aesthetic and owning it, Beabadoobee is a whole moodboard. Chances are, you’ve come across her in an aesthetic-focused TikTok. She shared that one time, someone showed her a TikTok calling a hodgepodge of nostalgic aesthetics “beabadoobeecore,” and she digs it.

“Fuck it, I’m gonna make my own core and call it beabadoobeecore,” she says, proving that she’s everyone’s peak indie inspo but also beyond just the girl whose song went viral on TikTok.

Right now, she’s focused on being herself, working on her music and making hits from her bedroom―her “cave of creativity,” she fondly calls it. “I can’t really finish writing a lot of my songs anywhere else. I can only do it in my bedroom,” she says.

She’s set to tour around the UK and Ireland next year, and fingers crossed, Asia as well.

“The chances are very slim, but hopefully corona can fuck off and not exist anymore so I can go and see everyone in Asia.”

An Asia tour, to her, would bring her even closer to home, the Philippines―particularly her hometown, Iloilo, one of her “dream places to perform in.”

To her fans in Asia, there’s hope for a tour in the future, promised in classic Beabadoobee fashion: “I’m gonna go, whether you like it or not.”

beabadoobee’s debut album “Fake It Flowers” is up for streaming on Spotify, Youtube and all of your fave music apps. If you missed her album livestream, you can still watch it here.

SHAREThe Ayala Museum is launching the next installment of its Virtual Reality Experience....

SHAREFor the past decade, streetwear has penetrated every possible industry you can think...