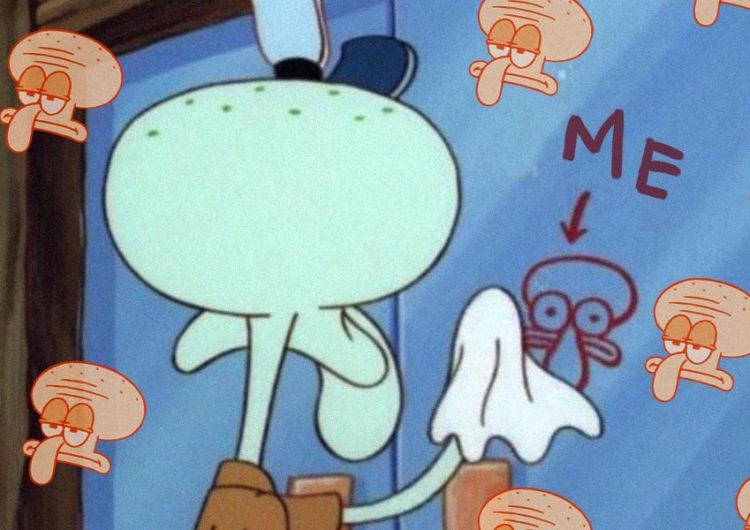 More often than not, everyone roots for the protagonist. And why not, when the formula conditions us to do so: They’re uncomfortably heroic, capable and fine-tuned enough to invoke likeability as much as they brave bombs and bullets.

What comes next when you meet the humanized version of the “fall seven times, stand up eight” 2012 Tumblr mantra? You become like them. Or, you want to be like them. And it’s relatively easier if it’s someone so lovable as SpongeBob SquarePants.

When finishing a page off a slambook, sealing a motto felt like the trickiest. But SpongeBob’s broken-record beat “I’m ready, I’m ready, I’m ready!”—in his Krusty Krab hat on the way to pull up at work—resonated with me when I was younger. He can do anything, save anything, change anything—even if takes tons of mistakes. Bikini Bottom’s famous sponge was the highbrow of the happiness department, too ridiculously admirable that I patterned myself after him.

In “Can You Spare A Dime?” SpongeBob (literally) made room for Squidward after he quit his cashier job because of a false accusation. This made Squidward a beggar housed in a box, which Spongebob initially thought looked like a “football-playing king in space,” an expired slice of Squidward’s dreams. In his true naive and selfless fashion, SpongeBob served his homeless and jobless nemesis without question.

But the more I loathed him, the more I realized I was becoming the protagonist’s wet blanket. I’ve become a Squidward.

Rewatching that episode made me cringe at my hero, thinking that Squidward didn’t deserve effort. He always spoils SpongeBob’s happiness, never reciprocates his efforts and proves to be the bane of his existence. How dare you do dirty to someone who made Pretty Patties a thing? But the more I loathed him, the more I realized I was becoming the protagonist’s wet blanket. I’ve become a Squidward.

The Squidward brand of aloofness took full swing post-graduation. During the shoot of a short film we made “for fun,” I told my high school gang about my heavy feeling of disinterest in many things. Enthusiasm felt like a chore as hobbies sounded like dead-ends. Quite ironic when we’re in the middle of something that demanded drive.

Mundane life events weren’t the only thing I felt tired of. I also slowly became distant with people, even if I honestly didn’t mean to. Opening messages? Responding in less than a minute? Taking long calls? I desperately craved solitude.

What happened to the person who could log four-hour conversations? My headspace started to suffocate every time. I couldn’t free up space. In the words of Squidward, “I hate people. People hate me. I am my own best company.”

He rarely gives a shit and if he does, he probably has a motive. At the end of the day, he’s a selfish, cynical buzzkill. But what if Squidward just humanizes our adult response to the harsh world?

Becoming irked with minor inconveniences bothered me too, as it wrecked my Patient Prototype past life. This also meant internally batting an eye to whoever gushed about their excitement over “little” things, the same way Squidward rolled his eyes over Spongebob’s reef blower (“childish!”), Patrick’s scatterbrain discoveries, Mr. Krabs’ dad jokes and basically every quirk of Krusty Krab customers.

As an employee, Squidward is lazy and undedicated. He rarely gives a shit and if he does, he probably has a motive. At the end of the day, he’s a selfish, cynical buzzkill. But what if Squidward just humanizes our adult response to the harsh world?

Squidward may not shout “I’m ready, I’m ready, I’m ready!” on the way to work, but it doesn’t mean he’s not a passionate individual. He religiously plays the clarinet, pulls off a tissue-inspired pop show and carries an art portfolio Renaissance painters would resurrect themselves for. The only thing is, he remains an “almost” in societal standards.

For instance, in “Artist Unknown,” we see Squidward failing to do a perfect circle despite being able to whip up an Impressionist “Bold and Brash” painting. He gets overshadowed by SpongeBob, who can actually sculpt a statue and draw a perfect circle. While throwing a fit, Squidward creates an amazing version of Michaelangelo’s “David.”

Not everyone around him appreciates his clarinet skills, especially when it doesn’t quite hold up at times. But his wins here and there deserve some credit. Exhibit A: playing the classical “Solitude in E Minor.”

He religiously plays the clarinet, pulls off a tissue-inspired pop show and carries an art portfolio Renaissance painters would resurrect themselves for. The only thing is, he remains an “almost” in societal standards.

Squidward grew up friendless, beside garbage cans at lunch and being pitied against his rich ass band classmate Squillam Fancyson. To no one’s surprise, this rivalry endured when they got older, and Squidward was forced to pretend to have a glamorous life when they met again—an attempt to destroy his “Most Likely to Suck Eggs” reputation in high school.

Aside from being an owner of a five-star restaurant, Squillam also played the clarinet. With this, I can’t help but think that Squidward caught the bad side of fate. In the  “Dunces and Dragons,” episode set in the Middle Ages, Squidward’s medieval ancestor Squidly vowed that if he could not play the clarinet correctly, his seventh great-grandson would be cursed tenfold—which is Squidward.

Whenever reality breaks my heart, I send the iconic “Here Lies Squidward’s Hopes and Dreams” tomb meme to my friends. If I were to send it to Mr. Krabs, he’d probably say, “what a baby” like what he did after eavesdropping Squidward’s cry-monologue. But is it so bad to feel a little hurt when you realize the impossibility of your goals?

Sometimes, we need Squidward’s to-do lists to survive: try to relax, talk to self, work on art, cry, practice clarinet, use imagination and give up. We can’t be the SpongeBobs the world wants us to be all the time.

Squidward is far from perfect. But there’s comfort in knowing that such cartoon characters like him exist. You learn to understand them as you get older, which means you’re actually growing up. You also wish them great success—something a protagonist would normally have. Because that’s what you want for your imperfect self too.

(And oh, we also gotta give it to Squidward’s protest speech against Krustry Krab’s oppression.)

SHAREWhat are the requirements of being a Bikini Bottom citizen? If a digital...