Films usually live in people’s heads rent-free because of one iconic scene. But some people also remember films because of one haunting clip that feels so uneasy to even talk about, that if you could impose charges for their overstay in your head, you would.

Whenever I recall the first “Transformers” movie, the image of Mikaela Banes (Megan Fox) flashes before my eyes first rather than the film’s then-shiny premise of cars turning into human-like robots. In a crop top, she fixes a car, her right hand on the engine, her left arm raised to lift up the hood. While she talks about how boys underestimate her skills in cars, the camera slowly pans over her sensual pose, making the audience stare at her exposed midriff, upper body, and back, completely defeating her dialogue’s—much more her character’s—purpose.

Even without knowing the existence of the term “male gaze,” you’d be able to spot these kinds of instances in media. In her 1973 essay “Visual Pleasure and Narrative Cinema,” feminist film theorist Laura Mulvey introduced the concept, linking the “pleasurable structures” in the cinema experience to Sigmund Freud’s psychoanalysis theory. She argued that mainstream Hollywood films tend to subscribe to “scopophilia,” which is sexual pleasure coupled with looking—the masculine kind.

Simply put, the male gaze is where “women in the media are viewed from the eyes of a heterosexual man, and that these women are represented as passive objects of male desire,” as Film Inquiry puts it. The material positions women based on their “to-be-looked-at-ness,” as a passive spectacle or “bearer” of a man’s gaze, rather than a real character with real feelings, thoughts, and the ability to own her sexuality.

But in a sea of cameras zooming on women’s bouncing breasts for no reason and questionable wardrobe choices (s/o to “Suicide Squad’s” Harley Quinn treatment), there’s also the “female gaze,” which humanizes the woman. Coined by feminists, this shows “the ways in which women and girls look at other females, at males, and at things in the world,” and takes into account how it influences the construction of gender, as per the Oxford Reference.

The female gaze in “Nevertheless”

And if you’re thinking of an example, look no further than what your TLs have been raving about: the Korean drama “Nevertheless.”

Viewers have naturally gravitated toward the Song Kang and Han So-hee-led romantic drama series, with some trying to pinpoint what makes it so “realistic.” Halfway through episode three, I realized the reasons point to its chef’s-kiss level of the female gaze. And it makes sense that the director, Kim Ga-ram, is a woman.

“Nevertheless” follows the brewing romance between university art majors Yoo Na-bi (Han So-hee), an independent woman who just got out of a toxic relationship, and Park Jae-eon (Song Kang), an attractive and popular man who doesn’t believe in dating. Because of Jae-eon’s smooth moves, Na-bi develops feelings for him, and finds herself in an uncertain setup filled with thrill and anxiety.

The female gaze makes it easy to empathize with Na-bi.

It’s easy to curse at Jae-eon’s character, but also difficult to crucify Na-bi’s choices. This is because we have full awareness of Na-bi’s stream of consciousness, which are sliced into honest internal monologues. The show proves that self-awareness (she thought, “The gates of hell have opened” upon kissing Jae-eon) and fragility (“I can stop this right now. Because there are so many reasons why I shouldn’t do this. But I’m still attracted to him, even at this moment”) aren’t mutually exclusive.

She’s realistically, wholly imperfect, not stuffed with superficial traits that make her a mere accessory of a love story. She isn’t plainly framed as Jae-eon’s object of desire. We feel her frustration about his dreamlike mystery, too. The female gaze makes it easy to empathize with her.

Plus, she isn’t deprived of being emotional—because emotions shouldn’t be seen as weaknesses just to champion the “strong female character” label.

“Nevertheless” definitely has a lot of scenes that make for its 19+ rating. I can’t even count the times they kissed and slept together. But as a woman, I don’t feel violated by the characters’ portrayal compared to my experiences watching sexual scenes in most mainstream Western films, where women are often objectified.

In the first episode, their romantic and sexual tension are represented in close-up shots of the arms, wrists, and hands. That’s why every time Jae-eon holds Na-bi’s (or anyone else’s) shoulder, it stings.

In episode three, tenderness is intimacy’s language in bed—from how Jae-eon pulls her hair into a ponytail to how he holds her neck. When Jae-eon takes his shirt off, the screen doesn’t shove his abs in our faces or forces us to stare at Na-bi’s body parts for a long time just to imply the scene’s “hotness.,” Instead, while the characters make out and remove every other article of clothing, the haziness gets intensified with the camera’s focus on intertwining hands and delicate touches.

Even in other scenes, you’d witness how their silences are often the loudest because of the show’s focus on their lingering eyes. In the first episode, their romantic and sexual tension are represented in close-up shots of the arms, wrists, and hands. That’s why every time Jae-eon holds Na-bi’s (or anyone else’s) shoulder, it stings.

When Jae-eon finishes the butterfly tattoo on Na-bi’s shoulder with a soft blow, you feel the tension as Na-bi’s hands slowly close. When Na-bi stares at Jae-eon and the camera focuses on the cold silver bracelet on his arm, you suddenly feel Na-bi’s unexplainable longing. 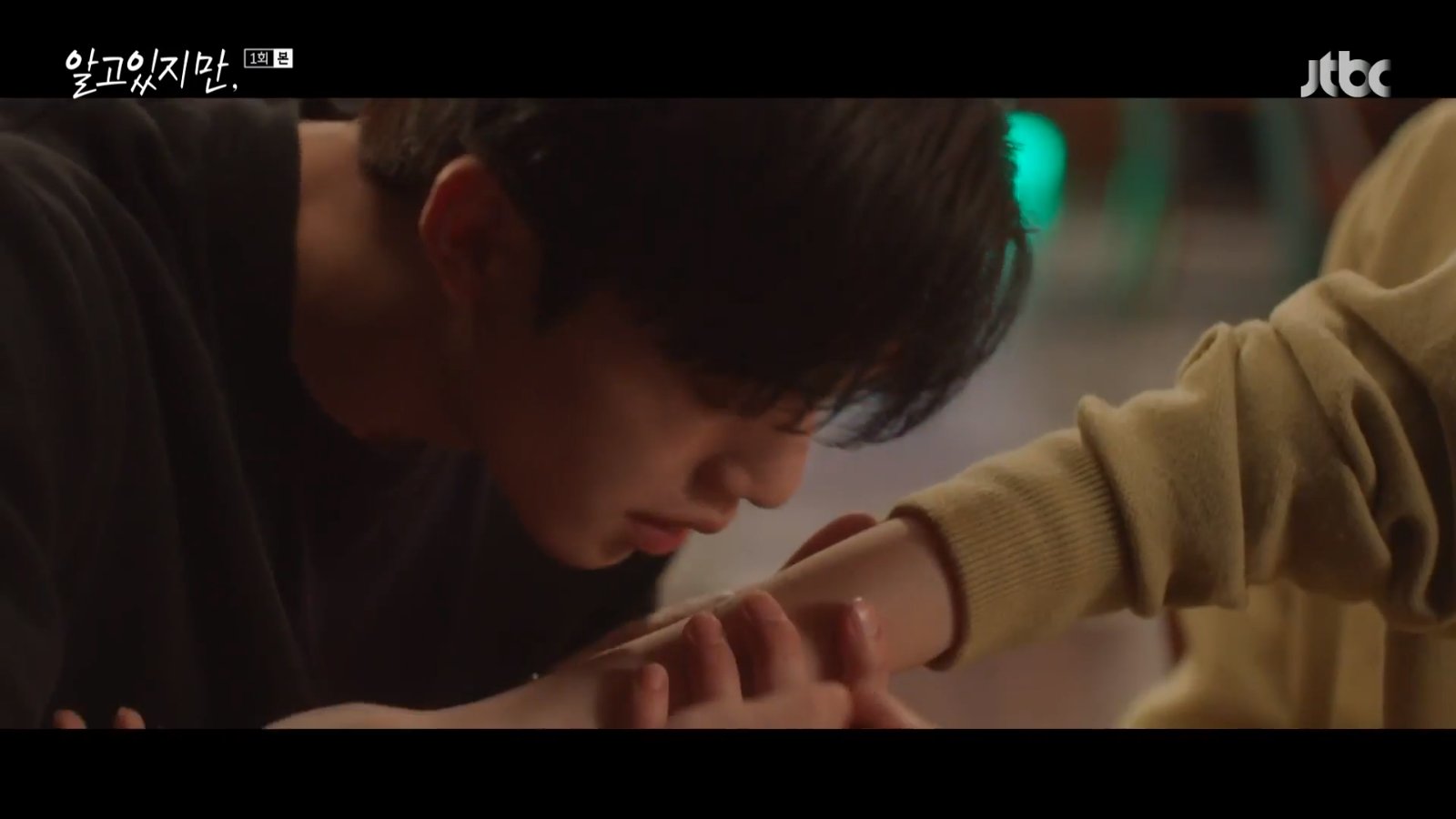 Apart from the pleasing character study of Na-bi, her strength as a real character seeps in the subtlest ways. Notice how we only see half of her abusive, toxic ex’s face at the start? The trauma from that relationship lingers in Na-bi’s distressing flashbacks of her time with him, as well as the questions that come with it. But he remains a deservingly forgettable thing of the past, and I think there’s a brave sense of authority in how he is treated in Na-bi’s POV. 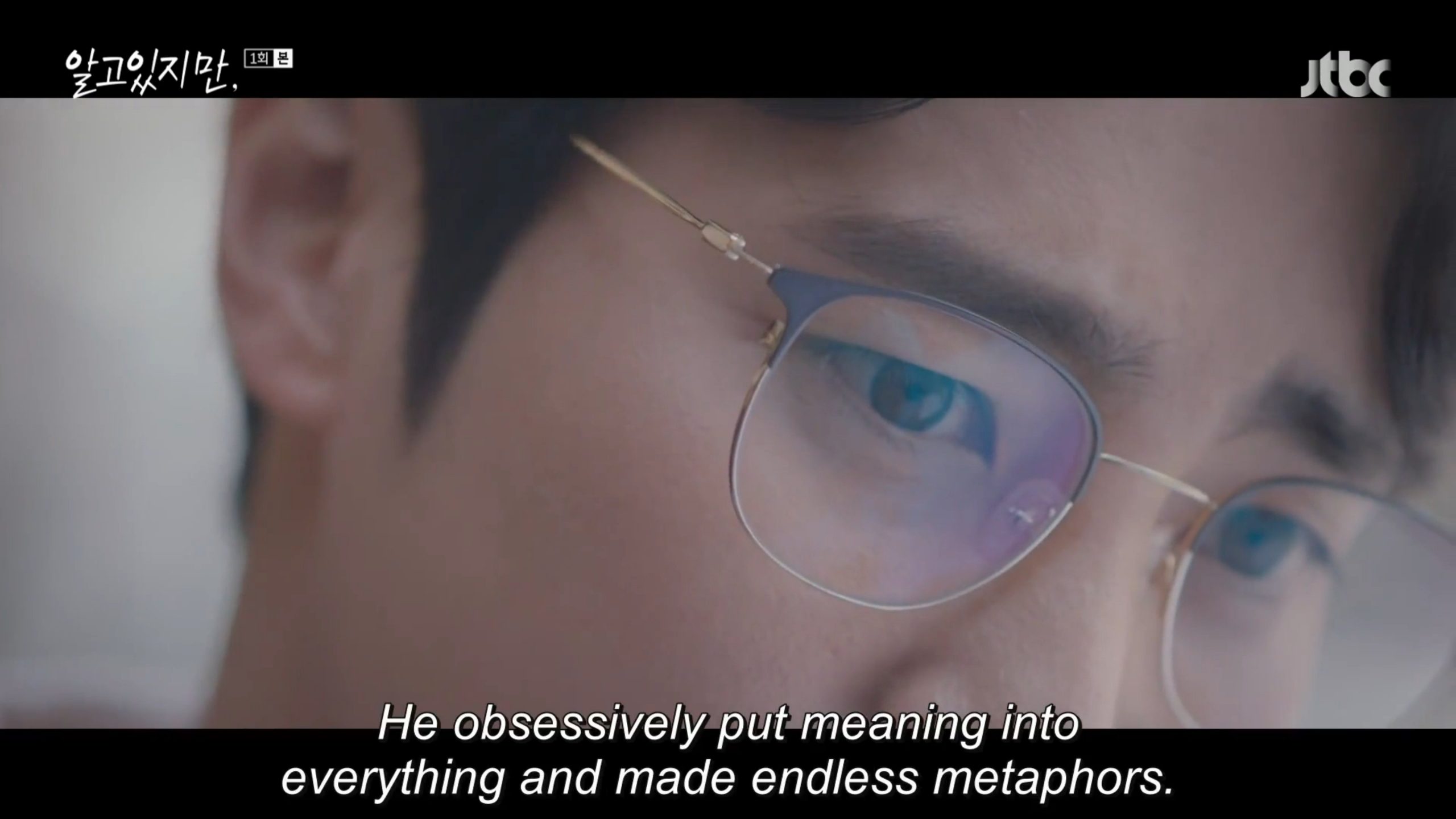 “Few jobs on a movie set have been as historically closed to women as that of cinematographer,” the Film Society says, as reported by Vulture in 2018. “The persistence of the term ‘cameraman’ says it all.”

After all, the male gaze’s biggest suspect is the dominance of men in the film industry—a snapshot of the patriarchy’s hold on the media. Here’s to fighting for women’s spaces, whether in front or behind the camera.

Stills from JTBC Drama and Netflix

SHAREA theater show without a backdrop, suitable costume, lights, and rehearsals before the...

SHAREThe Philippines is one of the first countries who witnessed Asian hip-hop’s beginnings....

SHAREMark the date, cinephiles and history buffs. Auteur Lav Diaz has a treat...