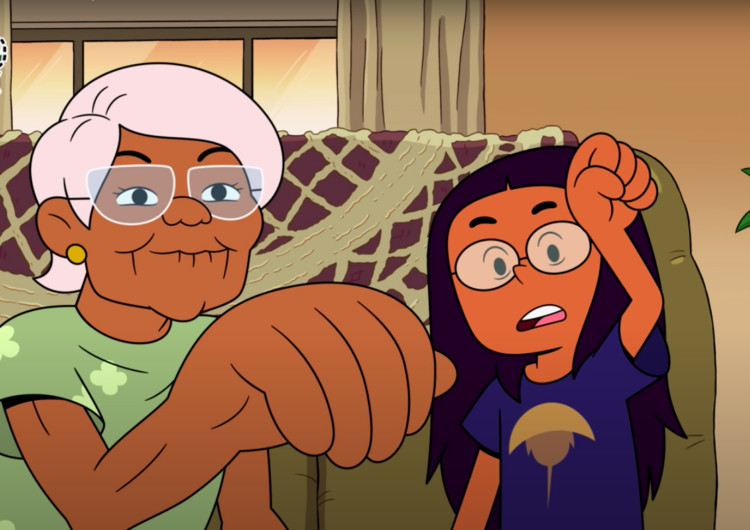 In a fickle sea of opinions throwing Filipino-dubbed cartoons under the bus, seeing a Filipino character on Western media talking in our languages can be refreshing—much more if it’s not the usual Tagalog being used.

In case it hasn’t reached your TLs, a clip from Emmy-nominated Cartoon Network series “Craig of the Creek” has been taking over the internet thanks to Twitter user @Gra_pple’s discovery. Airing since 2018, this comedy show on adventure and growing up follows 10-year-old protagonist Craig and his gang Kelsey and JP as they explore the “kid-dominated wilderness” around their neighborhood’s creek.

In this specific scene, Craig gets pulled by neighborhood “Sewer Queen” Eileen to meet her grandmother at home. Peeping from the kitchen, Eileen tells Craig, “I’m gonna introduce you to my lola. She only speaks Bisaya.”

Before approaching, Filipino-American Eileen even teaches Craig the traditional greeting of “mano po”—how young folks address the elderly as a sign of respect—complete with little gestures. “I don’t always understand exactly what she’s saying, but I do know whenever we say ‘hi’ to her, we gotta do ‘the bless,’” she says.

Before speaking to the kids, the grandma is seen invested in what seems like a TV drama. With peeled ponkan on her side, she blurts out, “Ah maayo ra na sila sa sunod na salida.” (Ah, they’ll be fine in the next episode.)

Eileen immediately does “the bless” upon approaching her lola, which prompts Craig to do the same once the hand is offered. This gesture charms the grandmother, who utters the classic line in Filipino family gatherings, “Oy kagwapo, imo ning boyprend?” (Ah, he’s handsome, is he your boyfriend?)

The accuracy of Eileen’s reaction, the lola’s quirks, and the sincere depiction of Filipino culture squeezed into a short clip warmed the hearts of many folks online. Once you check out the full episode, you’ll also notice the way they cooked rice (“saing” in Tagalog), and the local dishes served for dinner, like tortang talong (eggplant omelet) and sinigang na isda (fish stew). They also revealed the use of the word “ate” to pertain to Eileen’s older female sibling—and how her ate was low-key scolded by Lola for still wearing headphones on the dinner table. No gadgets while eating in this household, please.

While it’s a cute and fun watch, what ultimately made this worthy of a share is the fact that it actually showed Bisaya as a language, and was clear with this representation. No vague coding, no subtle hints. In a Manila-centric society, this is definitely a win. Just imagine how many Bisaya-speaking kids would feel seen after watching this?

Aside from that, the series—which shares a few creatives with the team behind “Steven Universe”—has been previously praised not only for its inclusion of people of color, but also for putting a black family at the front of the show. “We’ve seen a lot of positive reactions to [the show], especially moments like in the credit sequence where we see Craig just having dinner with his family,” says co-creator Ben Levin.

Witch duo Tabitha and Courtney are seen kissing in an episode called “The Haunted Dollhouse.” There’s also a scene where Kelsey, a confirmed lesbian and part of the show’s main cast, professes her admiration for Stacks, which she reciprocates. Meanwhile, a character named Pullstring uses they/them pronouns.

In fact, the team behind “Craig of the Creek” itself is diverse. “I love working on ‘Craig of the Creek’ for its dedication to representation, its funny storytelling and the sweet and earnest meanings behind so many of its episodes. Most of all, the amazing crew is what inspires me most about the show,” says Tiffany Ford, a Filipino-American who serves as a voice actress, writer, and storyboard artist for the series. She traces back her Filipino roots to her grandparents who lived in Cebu.

If TV shows want to make all kids feel a genuine sense of belongingness, offering minorities a positive space in the narrative is the first step. After all, even adults seek comfort in cartoons, too.

Hopping on the “Craig of the Creek” train? Good news: A fifth season, a movie, and a spinoff are on the way.

Still from “Craig of the Creek”

Tickets, check. Lightsticks, check. Banners, check. EXO hype playlist? We got you all...

SHARE  Warning: This article contains major spoilers. In my last year of college,...