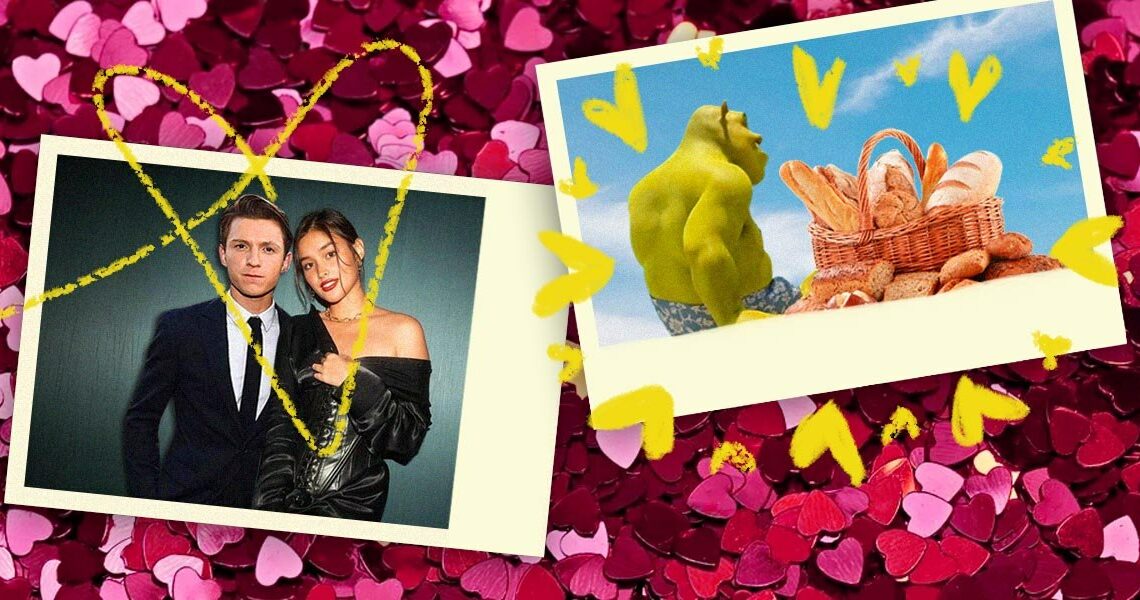 Ah, Wattpad, the breeding ground of young literary talent, guilt-free romance appreciation, and box office gems—but also the cursed rabbit hole of our Cringe phase, compiling crumbs from our prepubscent era (or even beyond that).

Somewhere in the website, there are fan fiction writers who are low-key coming for casting directors’ gigs, with their ever so fresh, ambitious—yet also sometimes borderline questionable and bothering—crack ships. Their canonization is a shot in the dark, but if the bizarre is your jam this Valentine’s month, we’re saving you a search.

Alvin (yes, of “Alvin and the Chipmunks”) x Levi Ackerman

Packed with angst and domestic romance energy, “Unexpected Love” written by Wattpad user @crybabhyy is straight out of a fever dream—from its peak 2000s Pizap book cover design to favorite “Attack on Titan” boy Levi seeing Alvin as a rat. “A rat like you eats human food?” he asks the chipmunk in a chaotic breakfast chapter.

After their “Who are you?” / “Who are YOU?” meet-cute by a broken window, they go on a series of flirty banters, a grocery store “date,” and some other emotionally soft moments the real Theodore and Simon would never believe.

What could be the similarity between an OG teen musical star and a reality show icon? Based on @itsraynedrusilla’s story, their Venn diagram could have the utilization of Instagram in making (or breaking) relationships—hence the title “Instagram Story”—and Sky Efron, their baby.

This fanfic recounts Kim K and Zac’s relationship history through private chats and IG photos, with the backdrop of the public eye, showbiz reporters, and some star-studded cameos. It’s a quick and easy read, like an actual celebrity scoop.

Typing the word “Shrek” on the site will clue you in on this creature’s versatility, to the point that he could spark chemistry with everyone and everything—even a loaf of bread. Straightforwardly titled as “Shrek x Bread” by @patrick–star, this story is vividly written in the very relatable point-of-view of bread, who marvels at the ogre’s sacred presence like the rest of the world. But Shrek isn’t exactly happy at the start of this “love at first sight” narrative.

Would an inanimate object change the course of Shrek’s life? How can a piece of bread possibly blush? “I’m sorry,” the author says at the start. I bet that’s for the intense Fiona slander.

In @adoreesun’s fanfic, Madonna and Swae Lee’s “Crave” gets a new interpretation. In Cupid’s roulette, who would’ve thought rapper-songwriter Nicki Minaj would be paired with professional wrestler Roman Reigns? Absolutely no one. But the author really provided us with a playlist, a faux Wikipedia page, and a gallery of smoothly edited photos of the two to make this agenda believable.

The prologue begins with Onika (Nicki Minaj) casually sipping tea (no shade) at home, waiting for Joe (Roman) to come home. On this page, talks about marriage and kids are already expected, but we know it’s just the tip of the iceberg.

Will we live long enough to witness a Marvel x Star Magic fusion? We’ll never know, but at least this story took one for the team. In “These Streets” by @littleinfinitiies, Tom Holland is still Peter Parker. But other than that, Liza Soberano takes one-half of the protagonist seat as Max Kent.

Max is occupied with her memories of Peter Parker, a boy she’s known since forever. As inseparable—but opposite—best friends growing up, it became default for Max to walk in Peter’s shadows, the boy everyone admired. However, a tragic family accident pushes Peter to cut off Max from his life, leaving her with unparalleled hatred. But as destiny (or classic rom-com twists) would have it, their paths cross in Midtown High. A tale of childhood love, pursuit, and self-discovery? We’re already signing up, but sadly, it looks like the story has paused after its second chapter.

Your middle-aged tito (and the rest of his gang) aren’t the only ones who can immortalize Elvis Presley. Author @AddictingFanFic decided to pair up the King of Rock and Roll with “Summertime Sadness” singer Lana Del Rey in 37-page fanfic “Recovery.”

In true 1950s melodrama, this story follows Elvis, who gets in a car accident in a blizzard with his girlfriend Candice. Soon, he is saved by Lana, with this incident giving them the space to get to know each other. Is this a cheating tale waiting to unfold? Or are there other layers that’ll make us root for these characters? I’m still wrapping my head around this as of writing, but this isn’t the only Elvis-Lana fanfic that exists.

Photo of Liza Soberano from her Instagram profile (shot by @kimweeebol_); photo of Tom Holland from his Instragram profile; bread photo from Pixabay; and Shrek’s photo from “Shrek Happily Ever After”