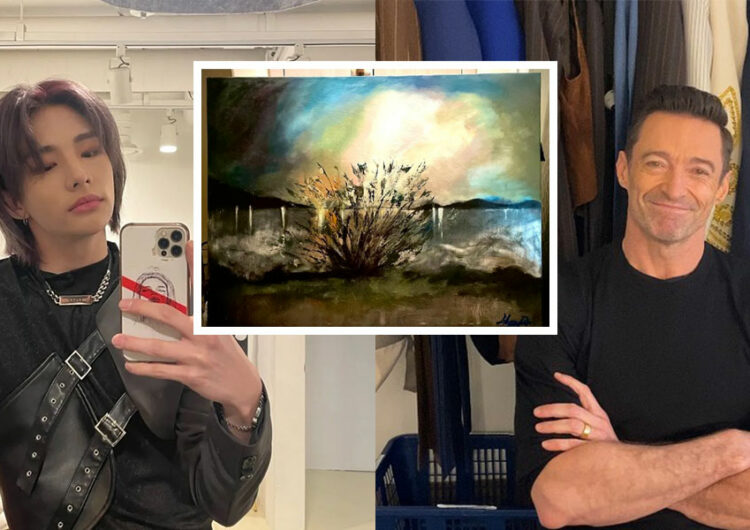 Quick question: What do Ryan Reynolds and Hugh Jackman have in common? No, not a vague connection to the Marvel Cinematic Universe, but their certified status as a Stray Kids stan.

But bad news for Deadpool: Wolverine’s alter ego, musical man, and full-time K-pop stan Hugh Jackman may be out for the title of biggest Stay after the Australian actor left a comment on member Hyunjin’s recent Instagram post.

The group’s main dancer shared a series of time-lapse videos on Stray Kids’ official page, which feature the idol in the process of painting a landscape artwork. Hyunjin, known to be a skilled visual artist in the fandom, shared a snapshot of the oil on canvas in the last slide.

Several Stays poured out their astonished and caps lock comments, but one in particular caught a lot of eyes—including Hyunjin himself.

The Stray Kids x Hugh Jackman (feat. Ryan Reynolds) crossover could likely be traced back to when the group’s leader Bang Chan professed in April 2021 that he was a “big fan” of both Reynolds and Jackman. A Stray Kids “Deadpool”-themed performance then caught Reynolds’ attention, one thing led to another, and the next thing Stays know is that Bang Chan is now the actor’s “new favorite Australian.”

In response, Bang Chan gave a li’l cheeky apology for dethroning Jackman, but Reynolds’ second favorite Australian was pretty gracious about it.

“No worries, bang chan!” he wrote. “I just worry for @Stray_Kids now that @VancityReynolds is a fan. He can be a lot. Gotta watch out for my fellows Aussies! Hi Felix!”

No worries, bang chan! I just worry for @Stray_Kids now that @VancityReynolds is a fan. He can be a lot. Gotta watch out for my fellows Aussies! Hi Felix!

Read more:
Stray Kids’ Bang Chan was caught jamming to Filipino rapper Alex Bruce
These 7 celebs are certified ARMYs (maybe even more than you)
Science just exposed K-pop stans for spending up to P60k on merch

SHAREYes, we’re perfectly aware that video game movies have failed us before, what...

SHAREThe dry season is here once again. Now is the perfect time to...