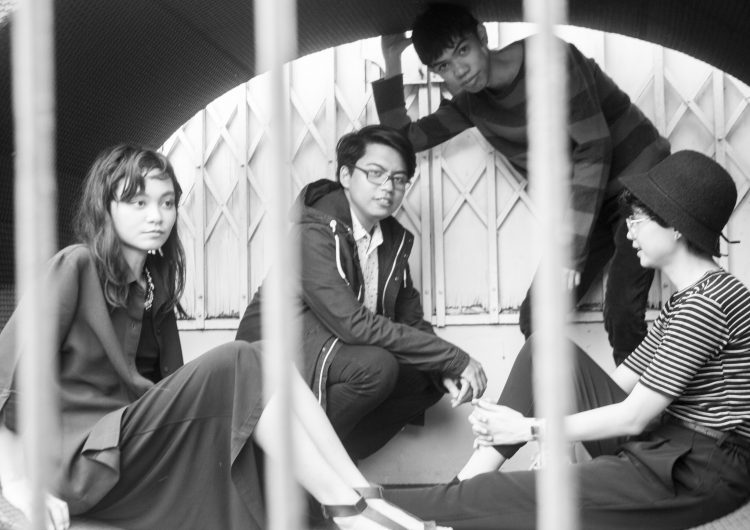 There is no middle ground between happiness and sadness. This is what happens when a song from garage folk band Ourselves The Elves spins. It has been almost four years since the indie outfit blessed us with Geography Lessons, a four-track EP that sent shivers down our spines. We even heard those songs in Petersen Vargas’ short film Lisyun Qng Geografia, and additionally their single “Okay Okay I’m Wrong I’m Sorry” in his full-length 2 Cool 2 Be 4gotten.

Read also: Ourselves the Elves on making music and listening to their inner elves

Last March 16, Alyana Cabral (vocalist and guitarist), Akira Medina (guitarist), Paula Castillo (bassist), and Ponch Salvador (drummer) threw a party at 123 Block for probably their biggest endeavor yet: their first full-length album. Entitled Self Is Universe, the band has previously described this as an exploration of the self and the universe around it. Its coverage tackles a hefty amount of human emotions and the introspection on these.

Aside from the signature Ourselves The Elves love language of sorts, there is disobedience, then validation, power, and energy. Endless questions, quirkiness, and quintessential move to trace back to their Kidlat Tahimik-inspired mantra: “Pakinggan ang sarili mong duwende. (“Listen to your inner little voice.”)” Unsurprisingly, this is best felt in first track “Sariling Duwende / Inner Faerie,” a raw forest-like indie folk journey with its zigzagged textures at the start up to its sturdy finish. “Shellfish” is a clever wordplay describing a seemingly doubtful relationship, and the hardships in trying to save yourself while you run its course. It’s like having to hold another hand, while you want to intertwine your own fingers to keep yourself in place first.

Read also: Ourselves the Elves release “D.I.C.K.” as part of compilation album

The interesting injection of pop and muffled conversations in “That 70s Song” and sudden heavy rock layers in “Waltz Disney” give an overview of the album’s diversity. “Spinal Crack” might want you to go back to your prom night again, filling in the awkward conversations of it, along with the intricacies of “These Nights” and “The Change.” The placement of the “Interlude” is a good acknowledgement of how the flow and breaks are vital to one’s listening journey, especially for songs which strike the chord harder than most, like “Sweet Sally.”

There’s also something that pushes me to say that almost the whole of Self Is Universe sounds perfect for any kind of dance. It’s ridiculously so well with choosing fitting time signatures and beat cues. Call it a stimulus for movement—soft, nicely-timed movement. It’s something that discloses as it whispers. Finally, the titular track “Self Is Universe,” a movie score-like closing fold, lets the listener cool down.

In its entirety, Self Is Universe not only explores but also investigates the deepest human emotions—even our ugliest—until it finds a certain level of solace. And eventually, acceptance. The music doesn’t feel intimidating, and your body will move if it wants to. Ultimately, it feels like home, like how our selves should be.

SHAREStage fright spares no one. Remember when Gabriella from “High School Musical” almost...

SHARETwo years after Julia Barretto and Joshua Garcia embarked on a journey to...