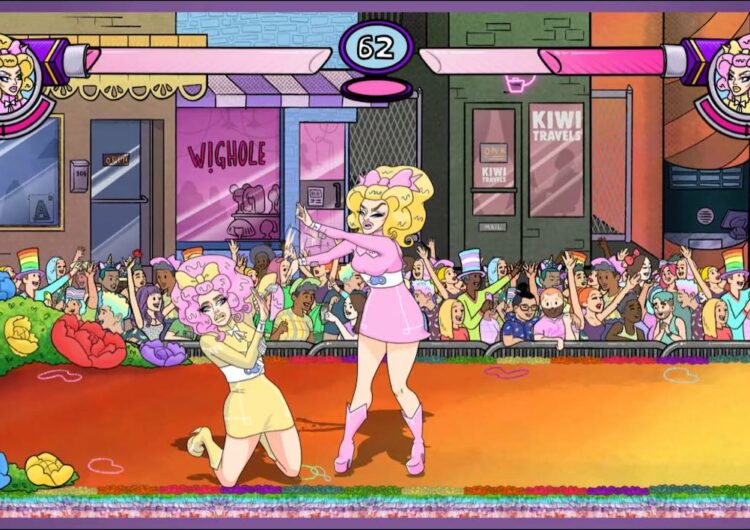 Category is: Street Fighter. The players? None other than your drag bets, of course.

If lip sync battles feel like last season’s thing, then a good ol’ fashioned video game brawl might be more up your alley. This is exactly the premise of Drag Her, a 2D fighting game that lets players embody real-life drag queens and kings, then have them battle it out for glory or just for the heck of it.

Created by indie studio Fighting Chance, Drag Her has local and online versus modes, career and training modes, made with all hand-animated attacks. The team behind the game describes it as “approachable, fun to play, and fundamentally stupid to watch” with visuals that scream camp.

Signature fighter moves range from stiletto attacks (ouch) to ultra-powered super sparkly rainbow glitter effects. In Drag Her, wigs and looks remain secure, and unlike Mortal Kombat, no one actually leaves a round visibly harmed—a point that Fighting Chance is resolute on.

“This is a community of people who have been abused for years and years and traumatized, so we wanted to make a game that’s kind of harmless in the sense that you’d beat the crap out of somebody, but it’s all a game, right?” says Jessica Antenorcruz, the studio’s narrative designer. “You’re never going to see them bleeding or bruised because that can be demeaning and traumatizing to people who have lived through that. It’s like the opposite of Mortal Kombat—it’s kind of a weird safe space.”

The studio has set up a Kickstarter for the project with a (nice) goal of $69,000. Fighting Chance is gunning for an alpha release by the end of year, a beta by 2023’s second quarter, and a final game release by early 2024. The game will be released on Steam for PC and Mac OS and potentially on the Nintendo Switch, but if you can’t wait that long, a Drag Her playable demo is already available to download for free.

Read more:
Queens of the night: A herstory of Filipino drag culture
Take a look inside Dumaguete’s rising drag scene
This RPG game is about a heist for unreleased Carly Rae Jepsen songs

SHAREWhen you can’t take it to the streets, we turn to the screens...