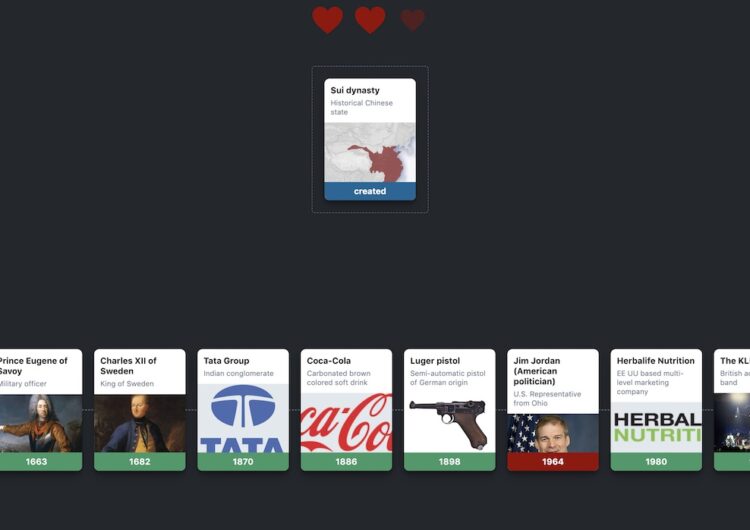 Somewhere out there, Wordle is shaking in its virtual boots. The new browser game WikiTrivia has landed on the internet, and yes, it’s another take on a high school class.

Developed by software engineer Tom J. Watson, WikiTrivia’s premise is pretty simple: Players must organize world history events in chronological order. Historical events are represented by cards with the subject and the type of event (“Created,” “Ended,” or “Born”). Each round begins when a new card pops up in the middle of the screen, and the player must choose whether it happened before or after the card on the timeline.

And so the process repeats on and on, until the player loses all three lives after placing three cards incorrectly. The game becomes significantly more difficult the more obscure an event gets, with cards ranging from the start of India’s Sayyid Dynasty to when Daleks first appeared in “Doctor Who.” (See, my 2013 Tumblr fandom knowledge has finally paid off.)

All cards are based on Wikipedia articles, though, so expect a few entries to make you question certain facts. Case in point: Who knew Henry V was a postage stamp designer?

Right now, my current streak is 10, and I’m on a round deciding when Dua Lipa was born alongside the second Persian invasion of Greece. If that sounds like your kind of chaotic nerdy vibe, check it out for yourself.

Read more:
‘Ikai’ is the new Japanese horror game to test your guts (and smarts)
Think of someone and this game will guess who they are
These mods will make your Chrome Dino game spicier™

SHAREBy Teresa Naval Like many children, I spent most of my younger years...